[ARCHIVED THREAD] - The original PDW concept is dumb. (Page 1 of 3)
SOOOO... loads of Russian special forces are gonna be parachuting in to the rear areas of NATO forces.  They are gonna be wearing body armor, 9mm pistols are not enough.

Well, first of all pistols were NEVER enough. Pistols take an ass-load of training to be proficient, an amount of training that no "big army" is ever gonna spend on all of those troops.  And, most anyone that knows guns thinks of a pistol as a secondary weapon, unless you have to go concealed.  The big armies never issued a 9mm to all of those troops.  When I was in in the late 80s, all those support troops carried M16A2s Drivers, cooks etc all had them.  They were never under-armed against those Russian special forces.  They were, WOEFULLY undertrained, but that is another story.  Jessica Lynch is a fine example of this.  Her and her friends were failed by their tactics and training, not their weapons.

Enter the P90 and the MP7.  This concept led to some interesting weapons.  Of course they turned out to be useful to people in highly specialized roles and these guys were invariably highly trained.  Good guns, but some guy or gal in the NATO comptroller office realized it was a dumb idea and never wrote the check those companies wanted.

But Currahee you ask, what about the M1 Carbine?  The M1 Carbine was the original PDW concept.  Except it never was used that way either, it became a primary weapon to many frontline troops.  It lead on to the idea of a smaller lighter individual weapon, because a full powered cartridge simply isn't necessary to the infantryman.  The modern assault weapon is an extension of the M1 Carbine idea, of course the Germans did it better and then the Russians.

If NATO had really been interested in defending the rear areas they would have given more training to the rear area troops.  Something well beyond the 40 rounds a year qualification.  If they were really interested in them being smaller, a 12-13 inch telescopic stock AR would have been fine.

Its always the Indian first peoples, not the arrow. 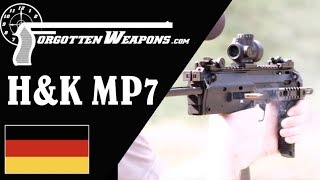 [ARCHIVED THREAD] - The original PDW concept is dumb. (Page 1 of 3)