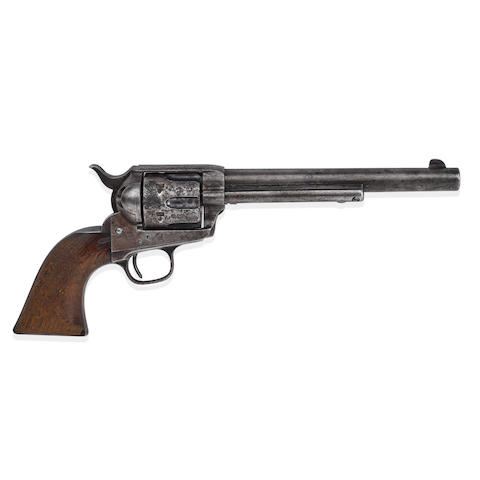 The "most iconic treasure of early Western history," according to Bonhams Auction House, is expected to fetch between $2 million and $3 million at auction on Aug. 27.

The single action army revolver belonged to Sheriff Pat Garrett, who tracked down gunfighter Billy the Kid after a months-long pursuit.

Billy the Kid allegedly killed eight men in Arizona and New Mexico and was wanted by law enforcement. He was shot and killed by Sheriff Garrett at a ranch in Fort Sumner, New Mexico.

The gun is one of more than a dozen weapons being auctioned off next month. They come from the collection of a couple in Texas who amassed Western firearms and other artifacts for about 50 years. Their family is now selling the collection.

Other highlights of the sale include a double-barrel shotgun that Billy the Kid used when he escaped from a courthouse in New Mexico, Sheriff Garrett's contract for the book he wrote about Billy the Kid, and other weapons from the same time period.

SHERIFF PAT GARRETT'S COLT SINGLE ACTION WHICH HE USED TO KILL BILLY THE KID, JULY 14, 1881, AT PETE MAXWELL'S RANCH.
An iconic piece of history from one of the most important events of the early west, Sheriff Pat Garrett's yearlong pursuit of the notorious Billy the Kid. Now part of the American mythology, Garrett's friendship with the Kid, their mutual respect, and his subsequent hunt, capture, escape and death have become the stuff of legend. The subject of hundreds of songs, films from Cecil B. Demille to Sam Peckinpah, and books, not to mention Aaron Copland's opera, casting the Kid as both villainous outlaw and unsung hero fighting for justice, the story of Billy the Kid has woven its way into the American imagination. As early as 1929, historian J. Frank Dobie noted, "... because his daring apotheosized youthyouth in the saddleyouth with a flaming gunand because his daring kept him running and balancing on the edge of a frightful precipice ... Billy the Kid will always be interesting, will always appeal to the popular imagination" (Dobie, A Vaquero of the Brush Country, Austin, 1998, p 169).

Like many legends, it can be hard to sort out the fact from the fiction. Pat Garrett's Authentic Life and Death of Billy the Kid, written with his friend Ash Upson, has been criticized for stretching the truth, but it is also generally acknowledged that the second half detailing Garrett's pursuit and capture of Billy the Kid is both factual and largely written by Garrett. According to numerous reports, including Pete Maxwell's sister Juanita, Billy the Kid and Garrett were close friends since Garrett had arrived in Fort Sumner, working for Pete Maxwell at his ranch in late 1878, and then tending bar. Miguel Otero, who knew both, reports that they were often seen together in the gambling halls, where they were referred to as "Big Casino" and "Little Casino." In the fall of 1880, Garrett was recruited by cattlemen John Chisum and J.C. Lea to run for sheriff, and to subdue Billy the Kid. He won by a landslide and by November had been appointed as Deputy Sheriff, his official Sheriff commission to begin on January 1.

Things began to move quickly, with Tom O'Folliard killed in Fort Sumner by Garrett and his posse on December 19, and then the entire gang pursued to Stinking Springs, Charlie Bowdre killed, and Billy the Kid, Billy Wilson and the rest captured on December 23. Significantly, this Colt, serial number 55093, along with a Winchester rifle (see lot 8), was taken from Wilson as he was captured, and being nearly new, Garrett began to use the guns in his professional capacity. Here, before even the turn of the New Year, before his official commission had even begun, he had accomplished what he set out to do: Billy the Kid and his gang were in custody or killed.

Of course, it wouldn't last. Convicted on April 13th and sentenced to hang, Billy the Kid made his last great escape on April 28th from the Lincoln County jail, dramatically killing deputies James West and Bob Olinger (see lot 9). The Kid, instead of leaving the country, started hanging around Fort Sumner and putting in time at Pete Maxwell's ranch again, possibly having an affair with Maxwell's sister Juanita. He moved around a lot during this time, and according to Garrett, left little trace of his whereabouts, although he was rumored to be in the vicinity. But in July, Garrett and two men, John W. Poe and Deputy Thomas McKinney, rode for Fort Sumner, and arrived outside the Maxwell ranch on July 14, 1881.

In a remarkable coincidence, in the telling of Pat Garrett, Billy the Kid and Garrett, both old ranch hands of Maxwell, once friends, both made their way on that night to Maxwell's bedroom at the ranch. Garrett arrived first, looking for information, and as he sat with Maxwell in the dark, Billy the Kid, looking for food in Maxwell's kitchen, entered Maxwell's room to see what was going on. He could see someone in the dark, but trusting Maxwell, did not want to shoot, asking "Quien es? Quien es?" Garrett fired, hitting the Kid in the chest, who himself managed a single shot which lodged above Maxwell's bed, and Garrett fired once more, missing, but unnecessary, as the West's most notorious outlaw, Billy the Kid, died in Maxwell's bedroom at the hands of his friend turned tracker.

Thus ends one of the Wild West's most enduring tales, the subject of endless rewriting and interpretation, adapted across the years into a multiplicity of forms. These retellings and adaptations create a one-hundred plus year kaleidoscope of American culture and psychology, endlessly revealing our history and changing times. The Billy the Kid gun of Pat Garrett is the most important and desirable Western firearm known, as well as one of the most well documented, and has never before appeared at public auction. An American legend made manifest, this iconic piece of history and mythology memorializes both the outlaw spirit and justice, encapsulating the notion of the code of the West.

ALL BIDDERS MUST AGREE THAT THEY HAVE READ AND UNDERSTOOD BONHAMS' CONDITIONS OF SALE AND AGREE TO BE BOUND BY THEM, AND AGREE TO PAY THE BUYER'S PREMIUM AND ANY OTHER CHARGES MENTIONED IN THE NOTICE TO BIDDERS. THIS AFFECTS THE BIDDERS LEGAL RIGHTS.

If you have any complaints or questions about the Conditions of Sale, please contact your nearest customer services team.
Buyers' Premium and Charges

Payment for purchases may be made in or by (a) cash, (b) cashier's check or money order, (c) personal check with approved credit drawn on a U.S. bank, (d) wire transfer or other immediate bank transfer, or (e) Visa, MasterCard, American Express or Discover credit, charge or debit card for returning clients only. Please note that the amount of cash notes and cash equivalents that can be accepted from a given purchaser may be limited.
Shipping Notices

For information and estimates on domestic and international shipping as well as export licenses please contact Bonhams Shipping Department.

News
How the West Was Won
The Collection of Jim and Theresa Earle at Bonhams Los Angeles
14 Jul 2021
View all news
Never miss an auction! 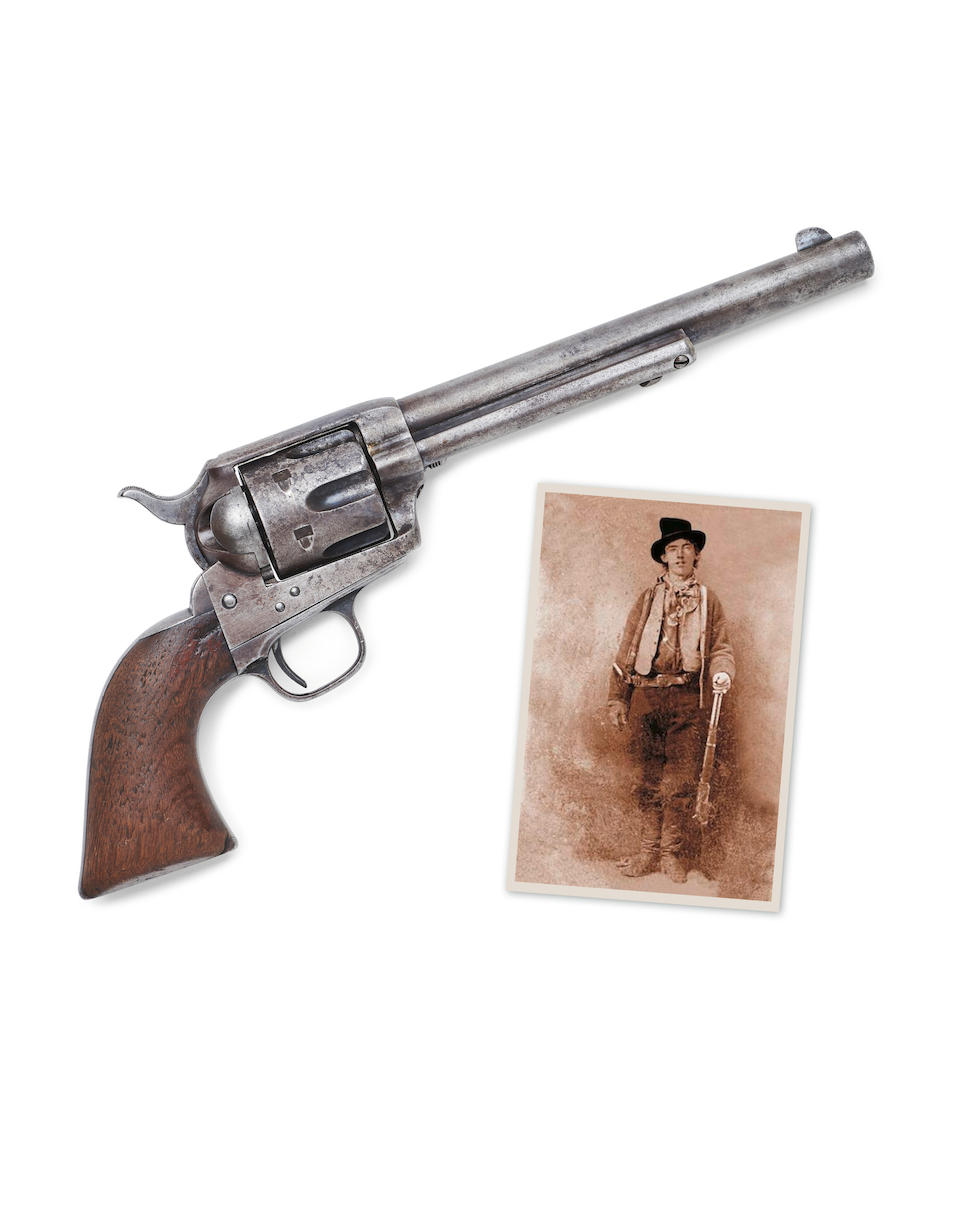 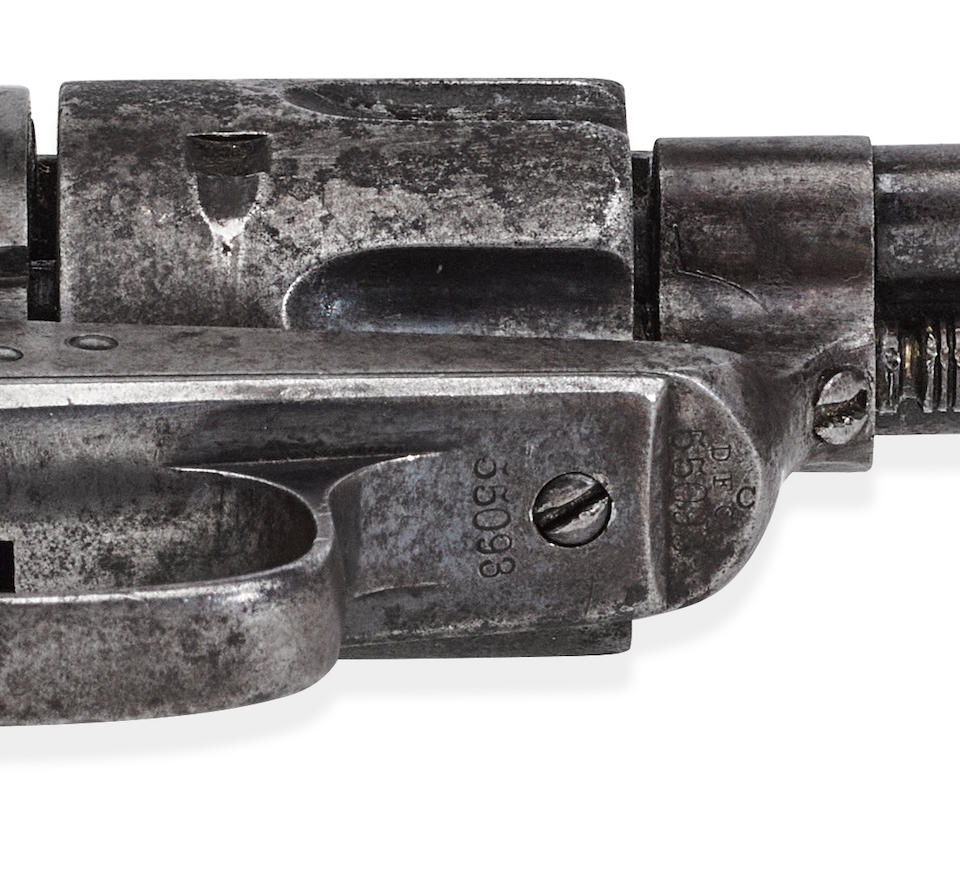 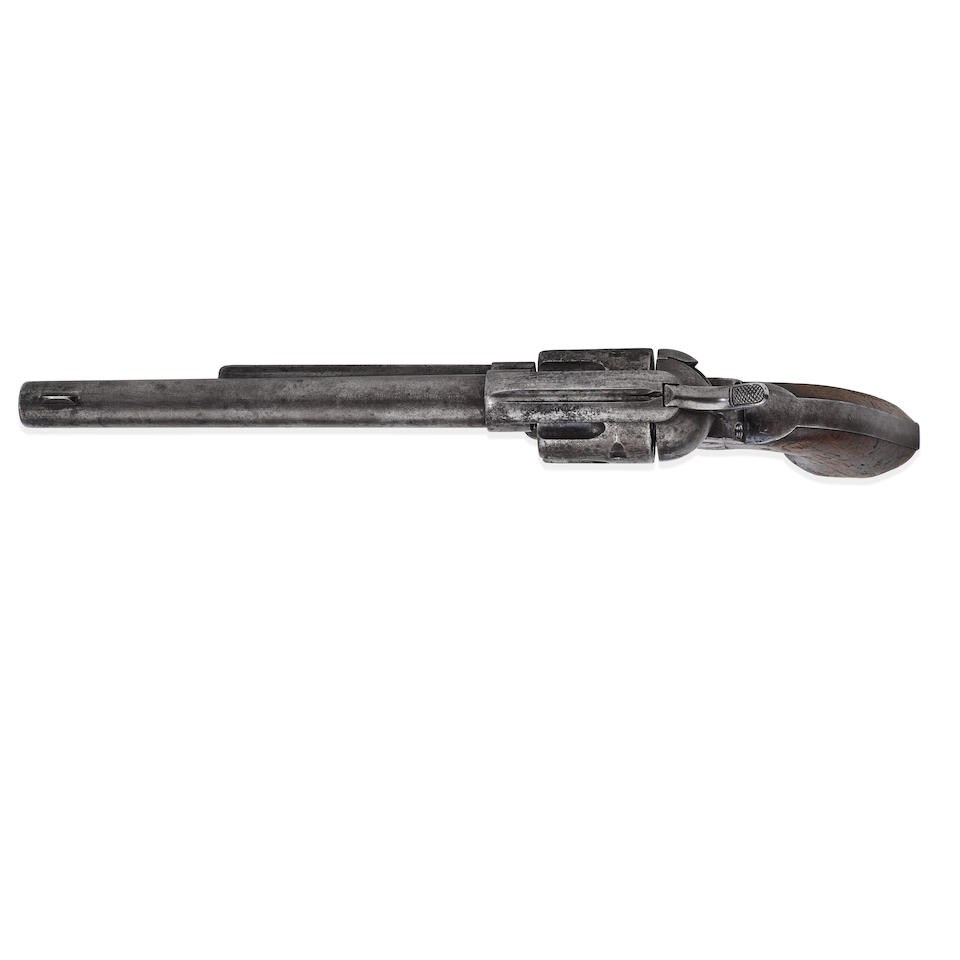 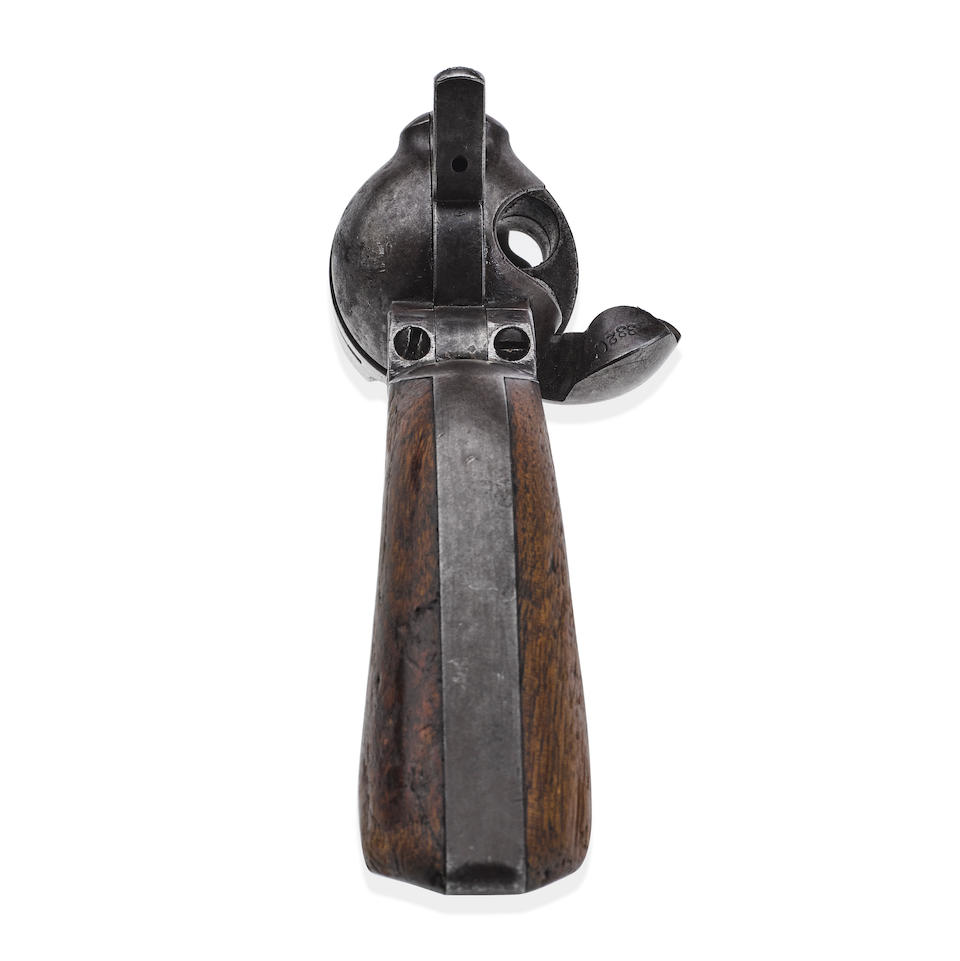 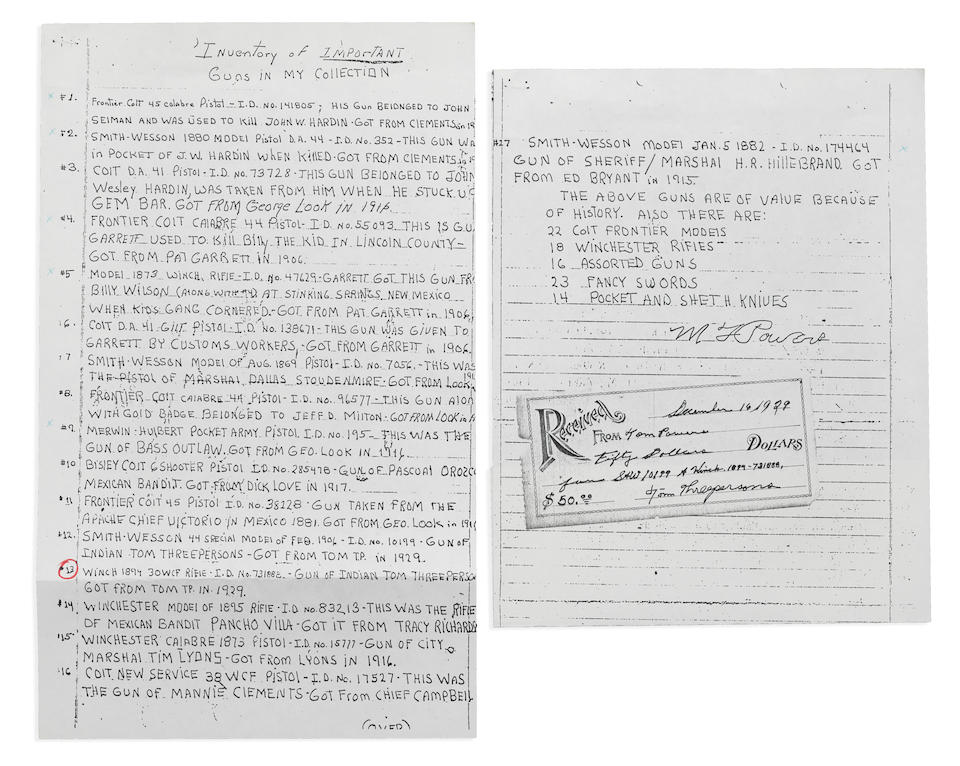 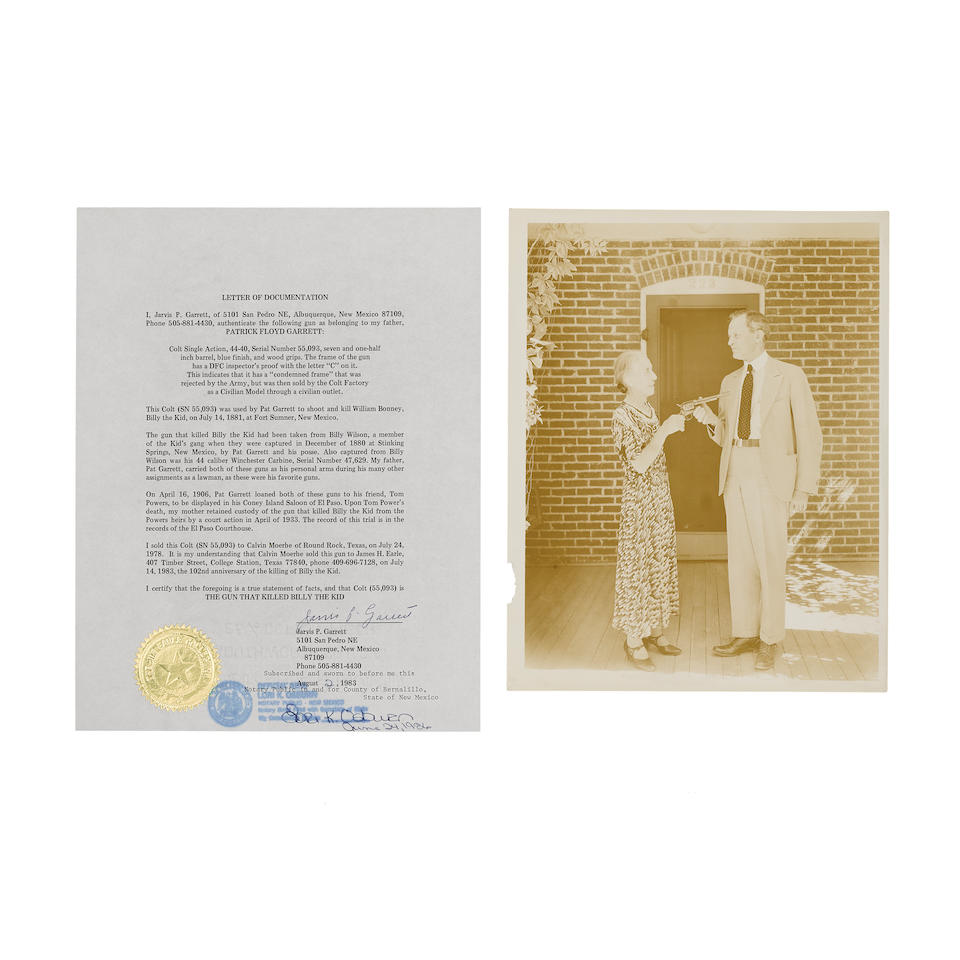