Talia Jo Warner, 23, Lake Elmo, Minn., was charged Aug. 28 with second-degree sexual assault of a child, use of a computer to facilitate a child sex crime, child enticement, causing a child older than 13 to view sexual activity, two counts of exposing genitals, pubic area or intimate parts to a child and exposing a child to harmful material, according to court records.
A warrant for Warner’s arrest was issued the same day. According to court records, she is scheduled to make her first appearance Thursday, Sept. 5.
A personnel approval included in the Somerset School Board agenda from the April 1 meeting lists Warner’s replacement. An attached recommendation letter indicates Warner’s replacement had been doing the job since the beginning of February.
Allegations of the assault first reached district officials Jan. 15, 2019, according to charging documents.
In a statement emailed to RiverTown Multimedia, the district “will not be discussing or commenting extensively" on the matter due to privacy concerns.
"When the District first learned of the potential allegations, Ms. Warner was removed from the classroom and the District undertook a full investigation and has cooperated with law enforcement through this process," the release states, and Warner's resignation took effect Feb. 11. "District staff appreciate the support of the community during this difficult time, and also want to thank the community for respecting the privacy of the alleged victim."

According to the complaint:

From sometime in October 2018 through the end of December 2018, a 15-year-old sophomore at Somerset High School received roughly 10 pictures and videos from Warner, which included one video of her performing a sex act on herself, the student told authorities.
The teacher and student had two encounters outside of school — once in her car down the street from his house and once more at her house.
On Jan. 15, a teacher and students alerted Somerset School District officials of Warner’s contact with the student. Warner later resigned due to the allegations.
“Based on the information received, Somerset School District officials believed the information was false and investigated the incident before law enforcement was contacted,” the complaint states. “Several persons were interviewed prior to law enforcement including Warner and several others that brought this information forward.”
The student was interviewed four times throughout the investigation — the first was by the school in which he denied any inappropriate contact with Warner and the subsequent three with law enforcement during which he admitted to the contact.
The student told police Warner picked him up Dec. 14, 2018, after a sporting event and the two drove back to her former White Bear Lake, Minn., home and had sex in her bedroom.
Authorities reviewed Snapchat records and found messages between the teacher and student intensified with “sexual talk and behavior” over the months that included talk of sending nude pictures. None of the images or videos of Warner mentioned by the student were located.
Second-degree child sexual assault and use of a computer to facilitate a child sex crime carry a maximum sentence of 40 years in prison and $100,000 fine. Child enticement is punishable by up to 25 years in prison and a $100,000 fine while causing child to view sexual activity has a maximum sentence of six years imprisonment and a $10,000 fine. The remaining charges carry a sentence of not more than three years and six months imprisonment and a $10,000 fine. 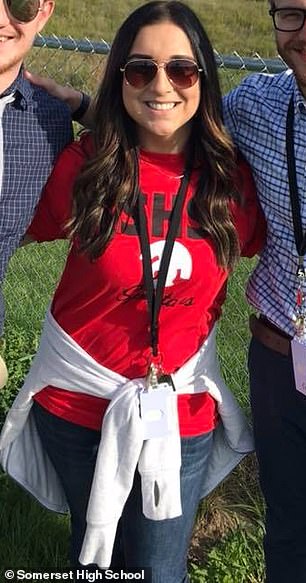