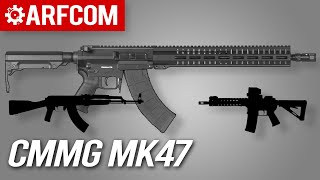 The CMMG Mk47 is a stylish hybrid from the Missouri-based firearms manufacturer that artfully combines some of the best attributes of the AK-47, with the AR-15.  The result is an extremely durable weapon with familiar controls, that musters impressive accuracy from the hard-hitting 7.62x39 round.

Join @seancurtis for a look at the Mk47.