Payment would be with a USPS money order, Zelle, or Apple Pay.

I do not accept PayPal/Venmo.

Will trade for Magpul M3 30 round AK mags in sand color.  Open to other trade offers as well, mainly AR parts, optics, and lights.  Let me know what you have!

Email is the best way to reach me.  Contact me before posting in the thread.

Any questions or if you would like to see more pics please let me know!

For sale is a Kreb’s Custon AK quad rail.  This was installed on a WASR 10/63 GP.  Installed it years ago and put about 1,000 rounds through rifle with it mounted.  Recently switched up my setup so it has to go.  Includes all screws and one receiver spacer.  Easy to install and is rock solid once mounted.  Has typical handling marks and a couple dings from optics and general use.  Is used but not abused, everything is tight and straight.  Screws were secured with red loctite per the original instructions, some residue can be found in screw holes and on threads.  Threads are in overall good shape, none are stripped and the hex heads haven’t been rounded out.  Has never been painted.  No instructions, tools, or extra spacers included.

Next is a used Midwest Industries Modular Optic Mount for Century C39 AK rifles for Aimpoint T1 mount pattern optics.  I bought this on gunbroker but the description the seller provided was wrong...  Was sold to me as the general AK Mount, but discovered it won’t mount to my WASR 10/63.  After some research discovered this is actually for the Century C39 variant AK rifles.  The mount itself will clamp to a standard AK side optic mount, but the modular optic mount part isn’t tall enough to clear the top cover.  You can replace the optic mount portion for other mounts they offer like the MRO, rail, etc., but I went a different direction with my optic so I no longer need this.  This is used (not by me) and definitely wasn’t abused, but it does have some general marks on it common to regular use.

I also have a NIB set of Magpul AKM Handguards and a Magpul MOE Grip, both in stealth grey, which has been discontinued.  I bought these along with other furniture to see which I wanted to use and ended up not using these.  These items are new and never used and come with everything as they did from the factory.  Handguards are the version with the cut out on the left side for a sling mount on the handguard retainer. 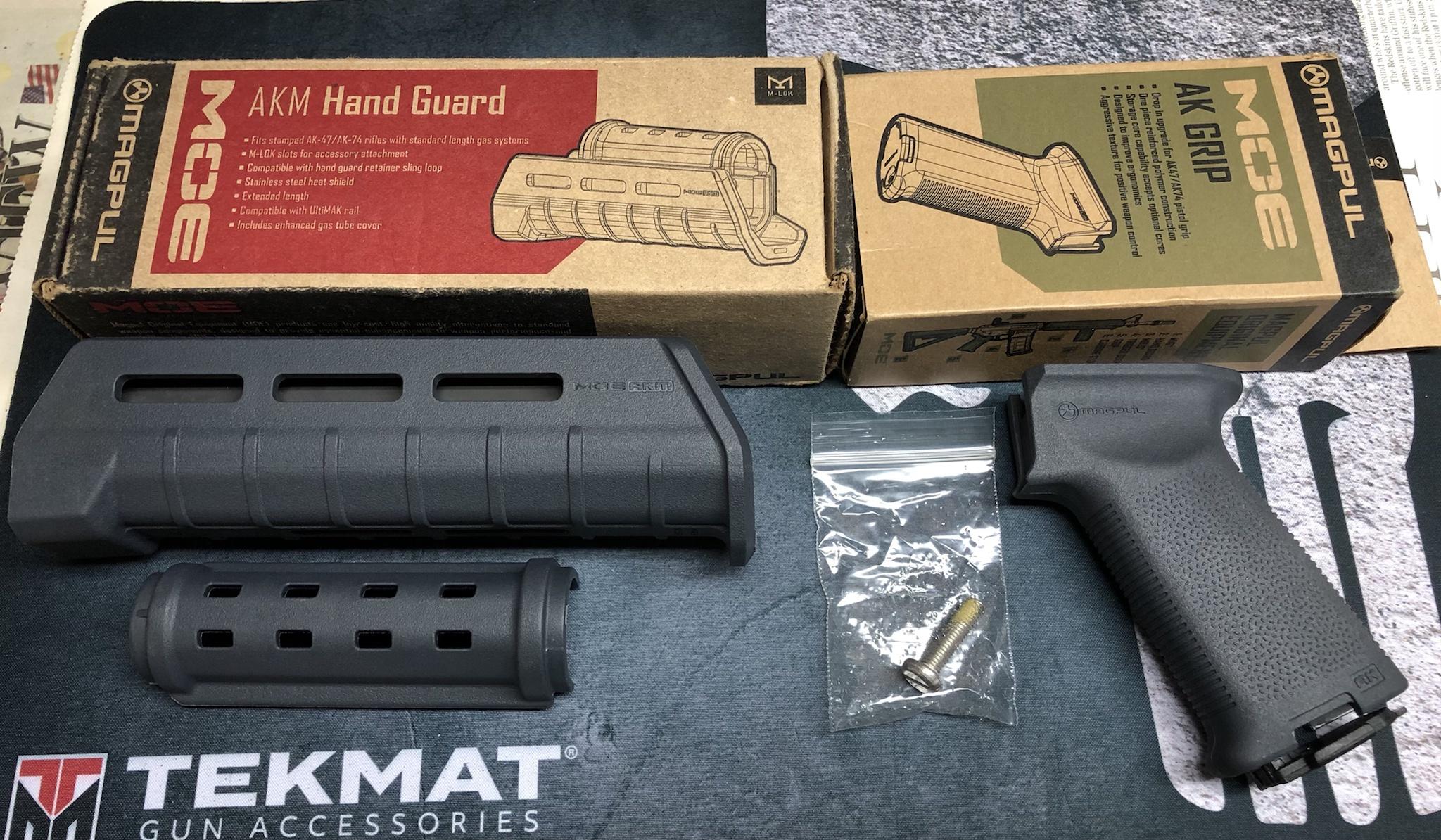 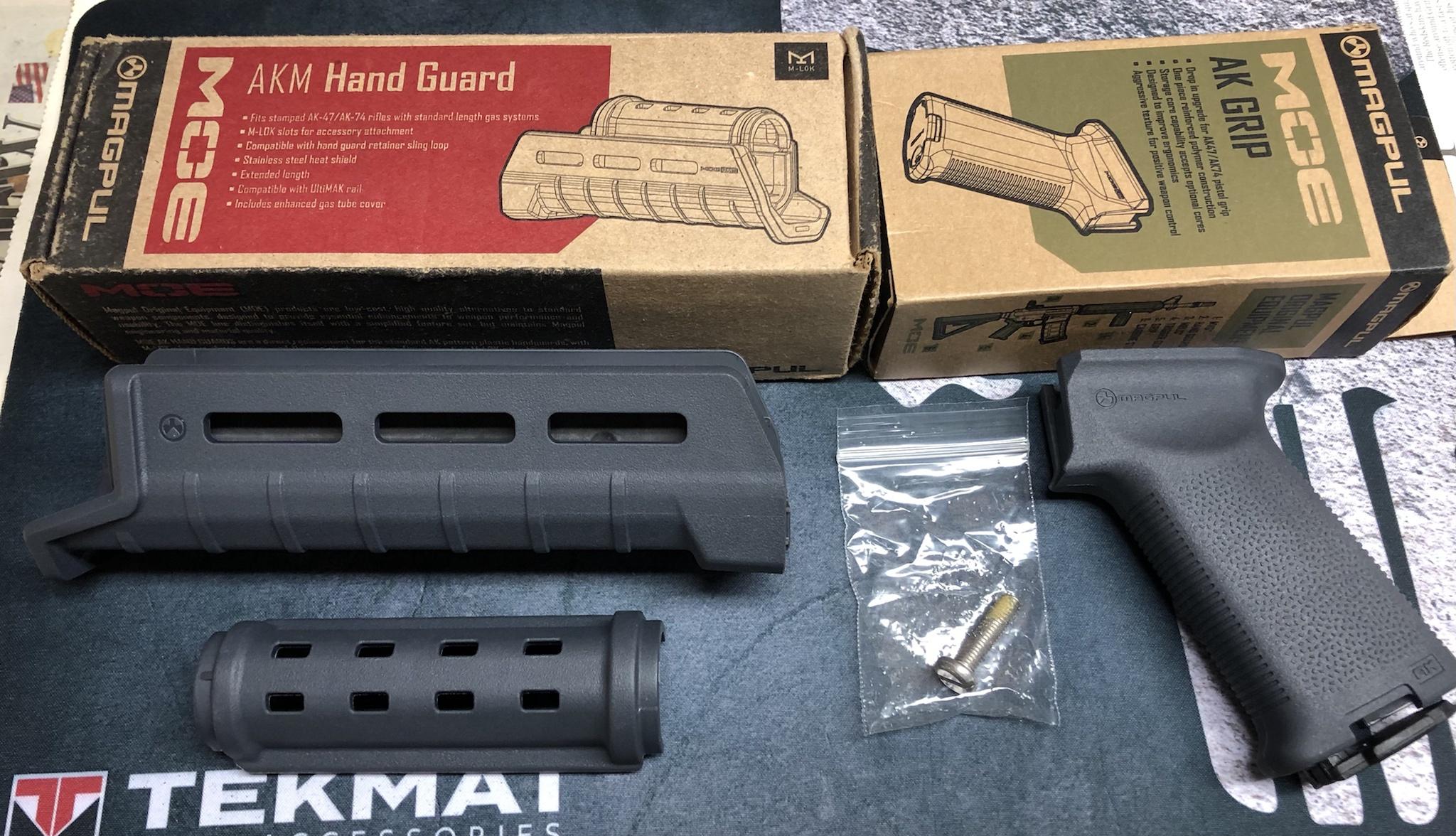 I also have an AK parts lot.  All parts came out of the same rifle, Romanian WASR 10/63 GP with a 1979 trunion date.  All have about 1000 rounds of use on them.  Includes trigger group, rear sight leaf, recoil spring, and a few other small parts pictured.
Price for the parts lot is $55 $45 shipped.  SOLD

Beer, it does a body good...Seriously...

Got the tapco brake. Thanks! Easy transaction!

posting for feedback, thanks
Beer, it does a body good...Seriously...