Detect intrusion into your perimeter with the MURS Dakota Alert perimeter alarms. Using PIR technology the sensors detect movement within about a 30 yard "cone" of the sensor and immediately transmit that information to both the base station and the handheld transceiver (HT).

The base station transceiver runs on standard 110 plug in power, the handheld and the sensors run on AA batteries. The sensors transmit with VHF and transmission range is upwards of a mile depending on line of sight.

The sensors can be camoflaged to match the environment- look at the pictures at the link above. 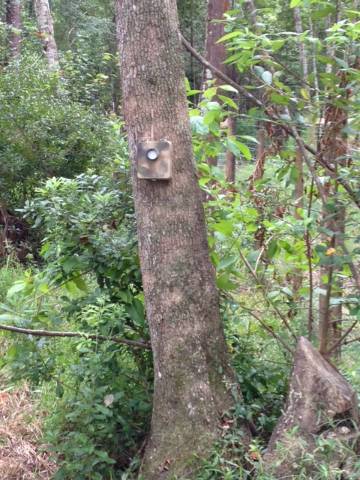 The handheld transceiver can be carried with you, nice if you want to FLANK the intruders and have REAL TIME updates to where they are moving.

This kit consists of FOUR MURS Alert™ transmitters and one M538-BS base station transceiver. In addition, in this set, we added in one Handheld transceiver (HT). This allows you to have a receiver if the power goes out or if you don't have an Alternate energy system to run the Base station unit. PLUS it gives you ability to have someone MOVING AROUND and being able to get REAL TIME info from the probes on detection. Very helpful in defense and flanking any possible intruder. Unlike trip flares, barking dogs and "whiz whiz woo woo" noisemakers, with the MURS Dakota Alert the intruder DOESN'T KNOW HE'S BEEN DETECTED!!!

WHO'S WATCHING YOUR BACK? These perimeter alarms act as 4 guards you don't have to feed or pay who will alert you to intruders up to a 1 mile away from the receiver! Add as many extra probe/transmitter detectors as you like to cover all "zones" in your perimeter. We have used these in conjunction with seismics and other options at the JRH retreat for years and have had great luck with them.

*One of the pics shows how you can camoflage the sensors to match their surroundings. Temporarily cover the "eye" with tape before you spray paint the unit to match it's surroundings. Remove tape after paint dries and before mounting.

*Clear any swinging branches near the sensor installation to avoid false alarms in wind storms.

*Some customers have reported good luck with using rechargeable batteries and hiding a small solar panel near the sensor to recharge the batteries in the sensors, thereby negating the need to go out every month or two to change batteries.

*These are great to use in "funnel" areas and near control points such as gate, narrow creek crossings, etc. Place them BACK a bit from the area versus right on top of them.

*It's possible to cover a large area with 16 or more sensors via setting up "zones" wherein each direction is an alert "zone" tone code. For example South is Alert Zone 1, East is Alert Zone 2, etc. That way you can immediately know the direction of the intrusion and if you have a large number of sensors covering a large area, consult your chart to see which one is detecting.
http://www.ar15.com/forums/f_2/716_JRH_Enterprises.html
Check out our new forum at AR15.com

Quote History
Originally Posted By hrt4me:
price?
View Quote
Several options as far as what they come with. You can buy individual pieces, whole kits, whole kits and then add more sensors, etc.

Here is the link

Most people buy the big kit that has the base station receiver (plugs into wall and uses 110AC), the hand held transceiver (takes AA batts) as a backup if power goes out and also so you can take it with you when you walk or ride out to checkout the intrusion, and then 4 detector/transmitters.

Let me know if you have any other questions. Thanks!
Robert
http://www.ar15.com/forums/f_2/716_JRH_Enterprises.html
Check out our new forum at AR15.com