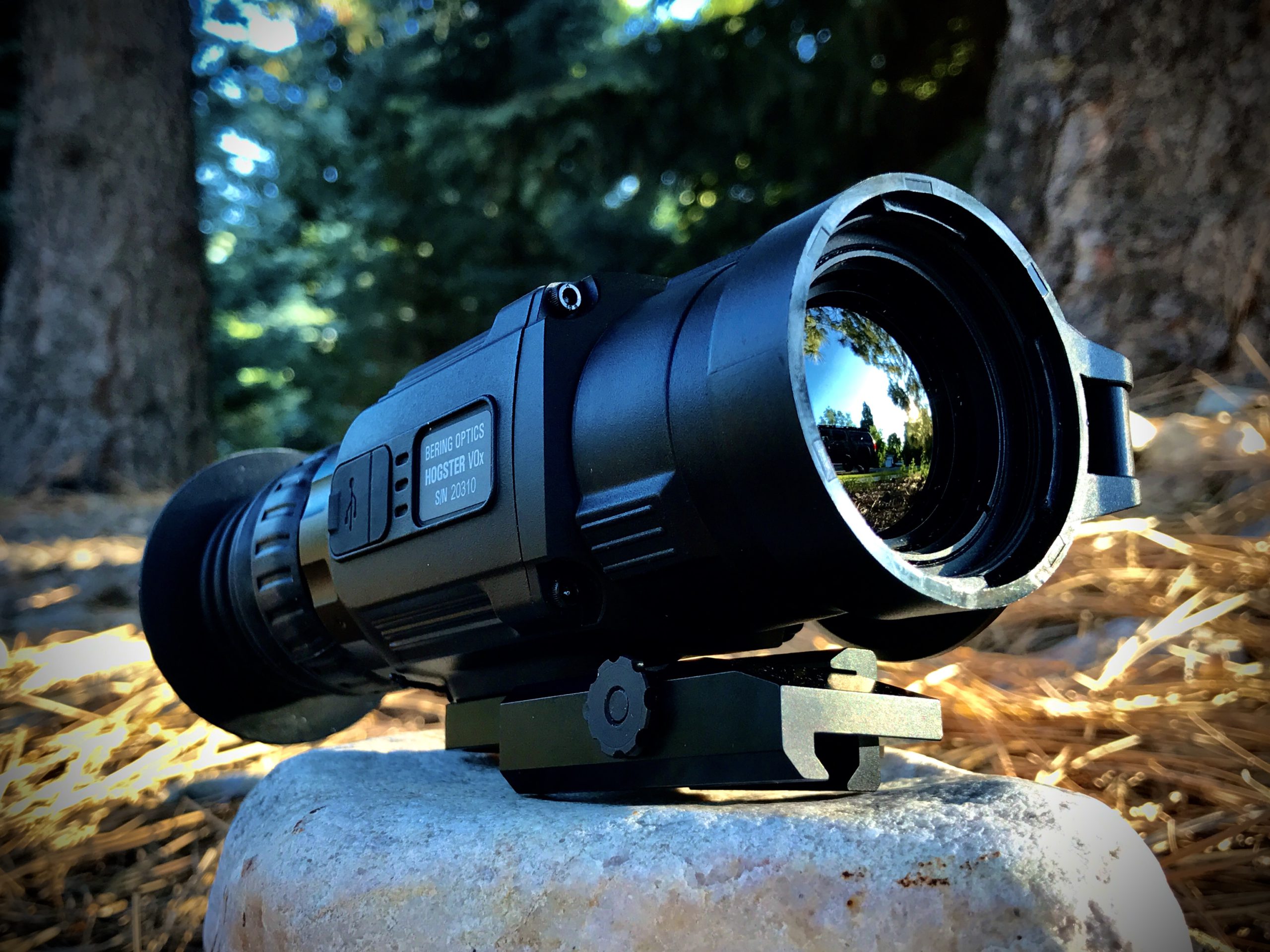 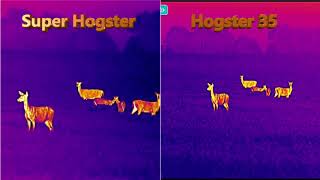 
The main differences in the Super Hogster:
• 2.9x native magnification compared to the Hogster-R 35 at 2x or the 25 at 1.4x
• 12 micron compared to 17 micron
• 384x288 matrix carved from 640 sensor. The result is a higher mag scope using the higher resolution and 12 micron sensor
• 8 reticles compared to 4
• Includes internal video (no audio) recording
• Includes Compass and Inclinometer

What is the Super Hogster:

One of Bering Optic’s goals is to produce quality thermal options at reasonable price points. The Hogster-C, Hogster-R 25 and 35 stand as great examples of this goal. The Hogster-R 25 and 35 are good short to medium range thermal units. There are many hunters who still wanted more native magnification.
Bering used a 640x512 resolution matrix, and in this matrix cut out a 384x288 segment. The result is a 384x288 resolution, 12-micron Hogster. The combination allows the Super Hogster (SH) to keep the same body and lens as the Hogster 35 but increases the magnification from 2x to almost 3x native/optical magnification. In addition, the Super Hogster also allows Picture In Picture (PIP), so the end user can have a PIP window at 2x of the main image magnification (5.8x). The alternative would have been to increase the Germanium lens size which would have increased cost and required a different body style.

Bering has used a term called "Simulates 640". They say it is a combination of two factors. The first was using the 12-micron, 640 matrix and cutting out the 384x288 segment. The second part was a special image compression algorithm. The combination of these two factors results in an image quality that, with the scope's 2.9x native optical magnification Bering says corresponds to an image similar to 640 resolution detectors.

When will it be Available:

Tom Austin, Programs Director at Night Goggles, and Pro-staff member, Korey Kirschenmann have had access to two Super Hogster Prototypes. Here is what Korey Kirschenmann had to say about the Super Hogster.
There is no question in my mind, the Super Hogster will be my weapon’s sight I use for this hunting season. The combination of increased magnification, internal recording, PIP image quality, and the selection of new reticles makes this an easy choice for me. The 2.9x native magnification with PIP (5.8x) gives me plenty of magnification while the 7.5°x 5.7° Field of View provides an ample view for finding coyotes and follow up shots on multiples. The SH is a great solution for the open plains I hunt. Korey Kirschenmann, Night Goggles Prostaff

The comments below reflect the most recent test results from Korey Kirschenmann:

The zero process was smooth. With increased native magnification, the target is very easy to see. The zero adjustments are .67” (1.71cm) on the SH where they are 1.02” (2.6cm) on the 35. This allows for a more precise zero. The adjustments moved as expected.

I saw no noticeable movement in Point of Impact (POI) after leaving the scope on for an extended period of time. I also placed an athletic ice pack around the scope for 15 minutes and shot a group and saw no noticeable POI shift. The ice pack test can impact thermals dramatically.

I also removed the SH from my gun on multiple occasions. When putting it back on, the scope maintained a reasonable zero. The most I ever adjusted after rechecking zero was one adjustment value (.67”) in either direction.

All Hogsters can be powered by CR123, Rechargable CR123s, and/or a 5v Battery pack. I tested the SH with the Night Goggles TRB Extended Battery Pack. It powered the SH for more than 10 hours. I also tested it with a set of rechargeable 123s and it ran the SH for 2.5 hours. Bering lists the specs for standard 123s at 4 hours for all 3 models. My tests agree the SH and all Hogster models should be fairly consistent pertaining to battery life.
A difference in the SH is it can be powered down with the battery pack connected. In addition to start the SH, the power button needs to be pressed even if a battery pack is connected. The Hogster 25 and 35 automatically start when connected and must be physically disconnected to power down when using a battery pack.

There are 8 reticles in the SH compared to 4 on the standard models. 4 of the reticles keep their size when the scope is digitally zoomed (similar to Second Focal Plane – SFP scopes). The other 4 reticles increase in scale as the scope is zoomed. This helps in long distance shooting as the holdover points remain the same throughout all magnifications. Bering is considering having a menu setting allowing a choice of FFP or SSP, so all 8 reticles would act the same based on menu setting.

The SH allows for Internal recorded video (.mp4) as well as Video Out. They can even be done at the same time. Bering Optics chose a high compression rate for the SH with file sizes around 6MB per minute of video. My calculations indicate the SH could hold up to 42 hours of video. I have suggested Bering to decrease the compression rate to get even higher quality video recordings. It is being considered but the video quality is still good considering the high compression.

On the test unit, the reticle flashes on the recorded video and the icons and PIP window are not recorded. Bering is investigating. The Video Out function is video only.

The SH image is very solid for a 384 x 288 resolution thermal. Many of the 12 micron 320 units on the market suffer from a lack of background detail. Although, the SH does lack a little of the background crispness of the standard Hogster, it still has a very strong image considering it is almost 3x native magnification. The overall image is brighter, and the animal detail is typically stronger on the SH in comparison to the 35 and 25.  Bering continues to investigate ways to improve the image quality of their thermal units and if improvements can be made will be implemented in future firmware

This is a big difference in the Super Hogster. The image doesn’t deteriorate nearly as rapidly on the SH as it does on the 35 or 25 when utilizing the zoom feature.

All Hogsters include PIP as a standard feature. They are a 2x magnified image of the main scope view. However, a change on the SH is a mini cross style reticle that is present in the PIP windows regardless of what reticle is chosen on main window. Many of the reticles took up too much room in the PIP window of the Hogster 35 and 25 and led to a cluttered appearance. This change in the SH cleans up the PIP window and allows for more precise aiming.

One option is to use an Android device with the Super Hogster app available on Google Play. However, the fastest process is to connect the SH directly to your computer with the UBC-C cable, and it appears as a device on your PC. From here, the media files can be copied directly to the PC. I have only tested this on a Windows 10 computer, and it worked very well.
Night Goggles Inc, Director
909.312.5424 [email protected]
www.nightgoggles.com
Introducing the Bering Optics SUPER HOGSTER R Ultra-Compact Thermal Weapon Sight!