[ARCHIVED THREAD] - Midwest Stinger Level II Review - an affordable and concealable vest for weird times (Page 1 of 2)
During the first 2 weeks of the Pandemic, things were pretty spooky in Las Vegas. Store shelves were empty, Casinos were being covered up in Plywood, gunshops were selling out, and local police patrols were almost non existent; driving around maybe 1 cop per hour vs the regular 1x per 5-10 minutes. My first trip to the grocery store, I was getting hard looks by grim faced shoppers walking out to the parking lot with a full shopping cart.

So, for the next 2 weeks, I wore by IIIA vest under a jacket whenever I would go out to run errands. The problem was, the vest was pretty thick (0.34") and stiff, necessitating wearing a jacket even though it was 70 degrees out, and even with a jacket on, the back of the vest would print through the jacket if I had to reach or bend over for things.

Luckily, everything blew over after that first 2 weeks, and things are pretty much back to the baseline level of Vegas weirdness.

But, that experience lead me to the realization that I wanted a much thinner vest - especially since the next crisis could occur during summer, when its 110 degrees out, and wearing a jacket would be impossible.

That thinner vest is the Midwest Armor Stinger Level II.

At 0.19" thick, the Stinger II can be concealed pretty easily even under a close fitting dress shirt. 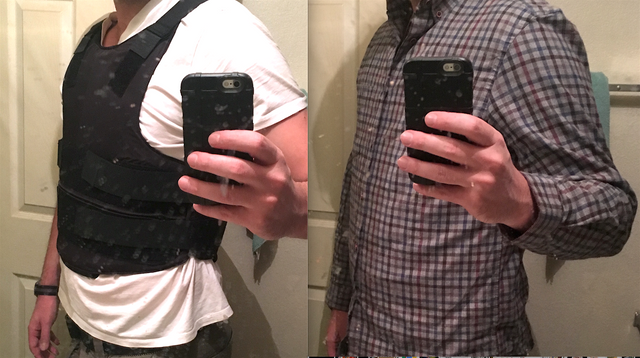 Being thin also makes for a more flexible and comfortable vest to wear. Its not 'comfortable' but its much less of a stiff, heavy pain in the ass then wearing my IIIA vest. As the vest breaks in, I expect it to become more comfortable and flexible.

The vest itself provides quite a bit of coverage. I made a cardboard cutout of a 10x12 armor plate, so you can get a sense of scale for how much area the vest covers. The Spectre carrier is sized exactly to the armor, so everything you see but the last 1/4" of edge is Armor.

Frontal coverage, with the 'plate' at the neck line of the vest which is worn at the 'sternal notch' below the throat. Note how the armor is both longer, and also covers the shoulders. Length from neck to base of the Armor is 14.5", height to shoulders is around 16". 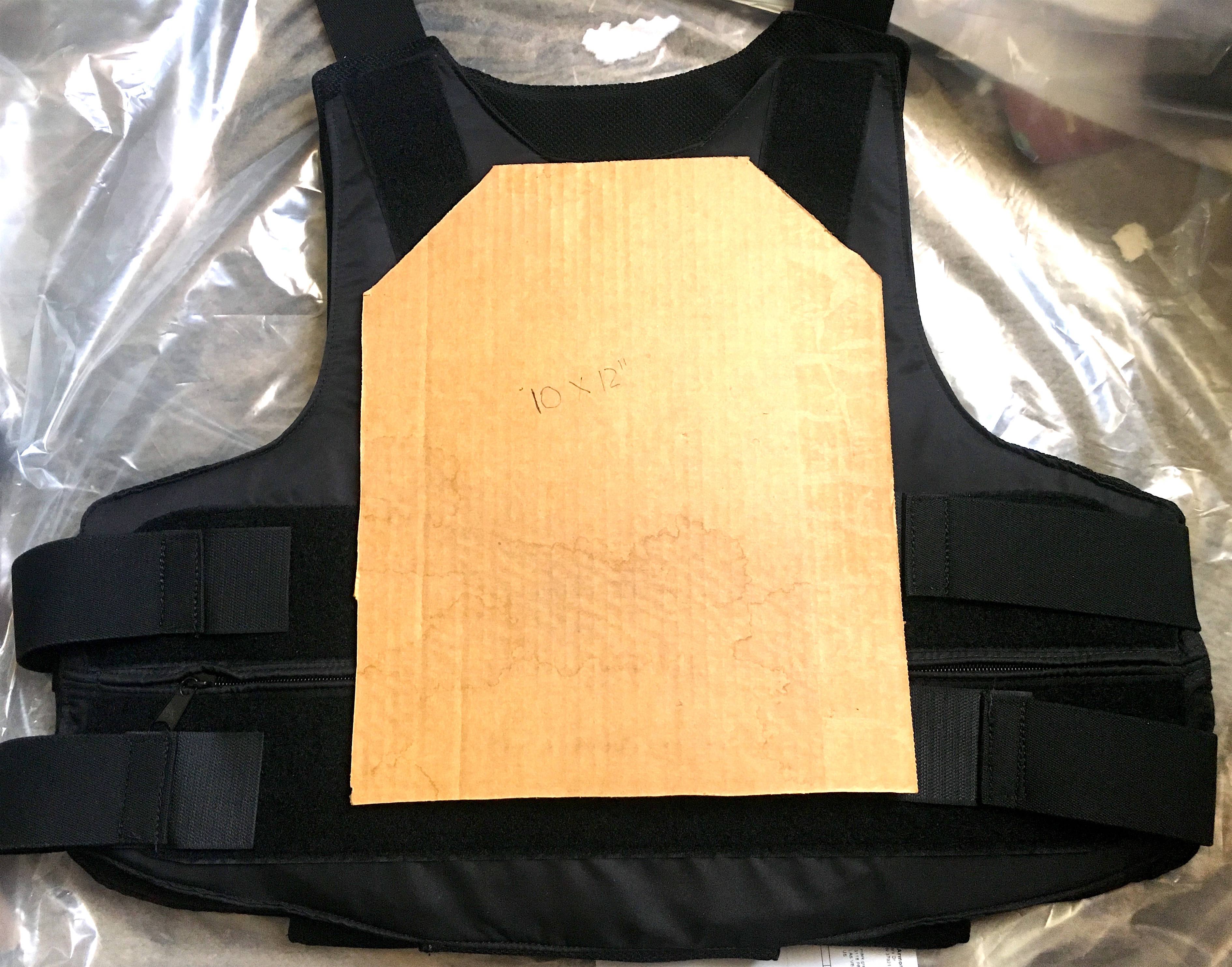 Rear coverage. The back is not cut for the neck, so you end up with a full, 16" tall strip of armor. 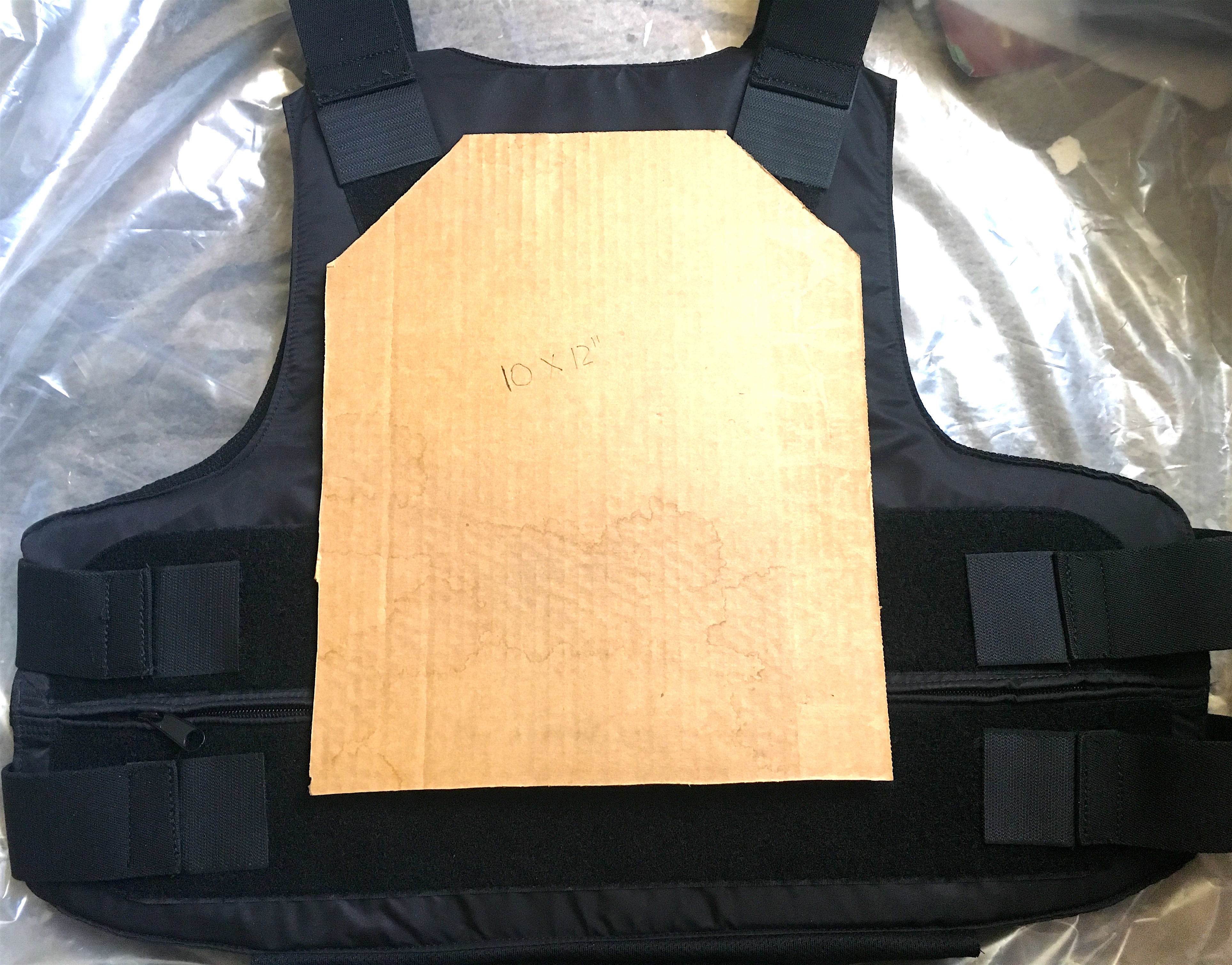 The wraparound side panels are 7.75" high, which provides a good amount of coverage while also allowing some ventilation.

Why Level II and not IIIA:

The first vest I ever bought was IIIA, because I wanted maximum protection from high end, exotic threats. That ended up being a mistake; I'm unlikely to end up facing a criminal with a FN Five Seven and SS198, Solid Copper 9mm, or a .44 Magnum, and I ended up being stuck with a thick, hard to conceal vest.

In reality, modern NIJ 06 Level II is already plenty of protection from any realistic handgun; the main difference between II and IIIA seems to be .44 mag resistance. Level II is rated for 9mm +P+ and full power .357 magnum. 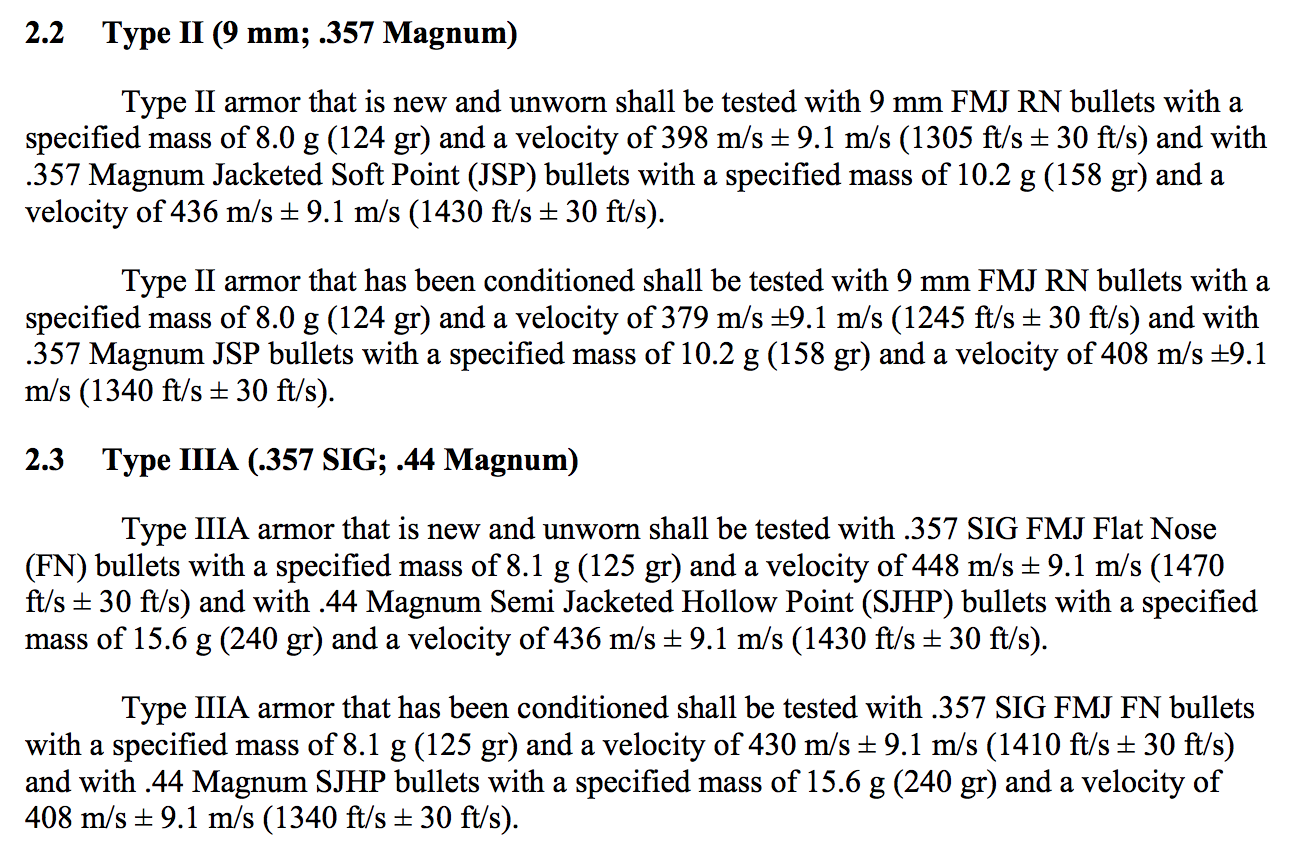 And the Stinger II is rated beyond the NIJ Minimums:

**Edit
I took out the insert, and the Midwest Stinger now uses the Slate SLSII armor package, which is actually a bit lighter at 0.85 then their advertised 0.89 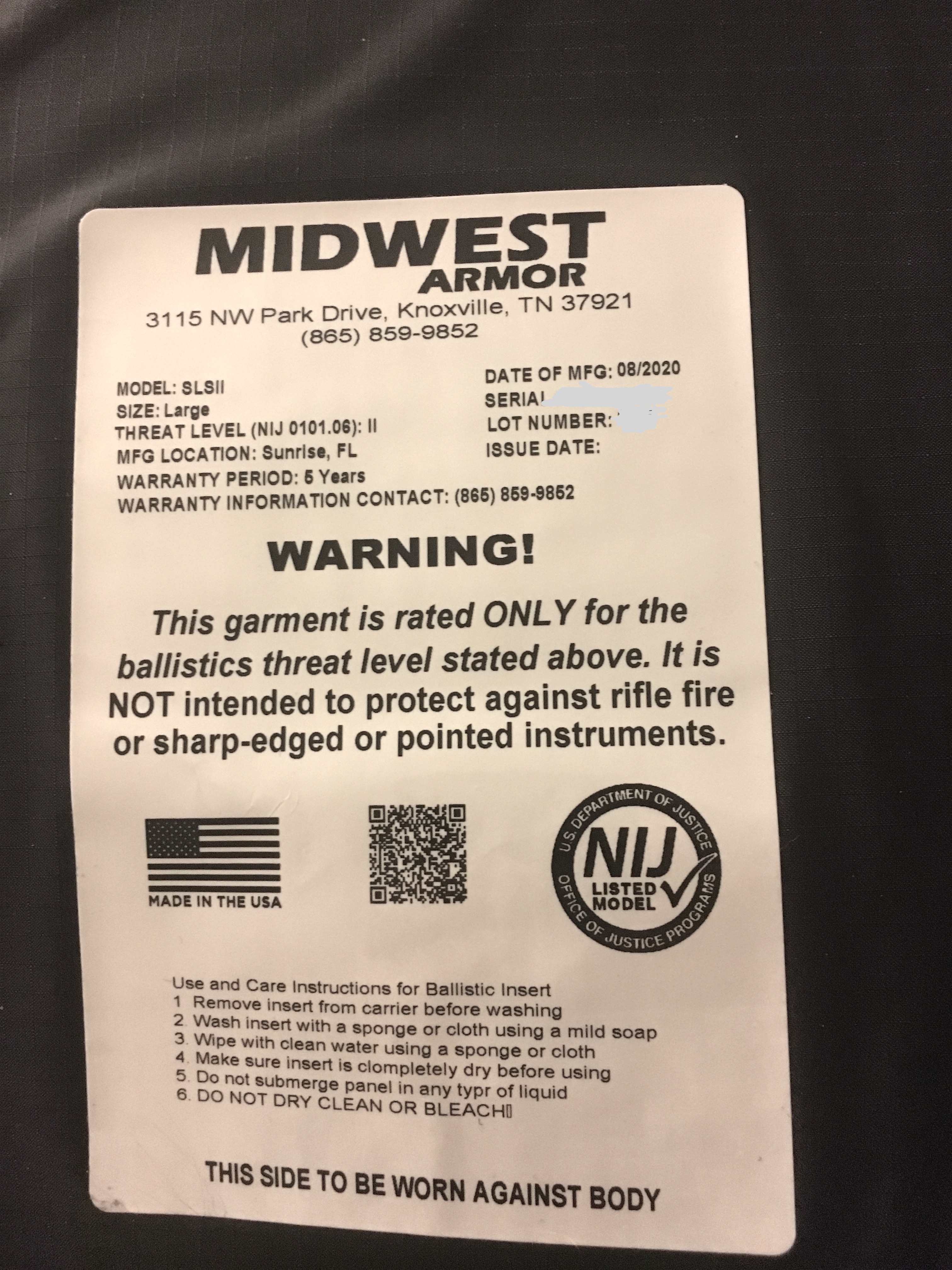 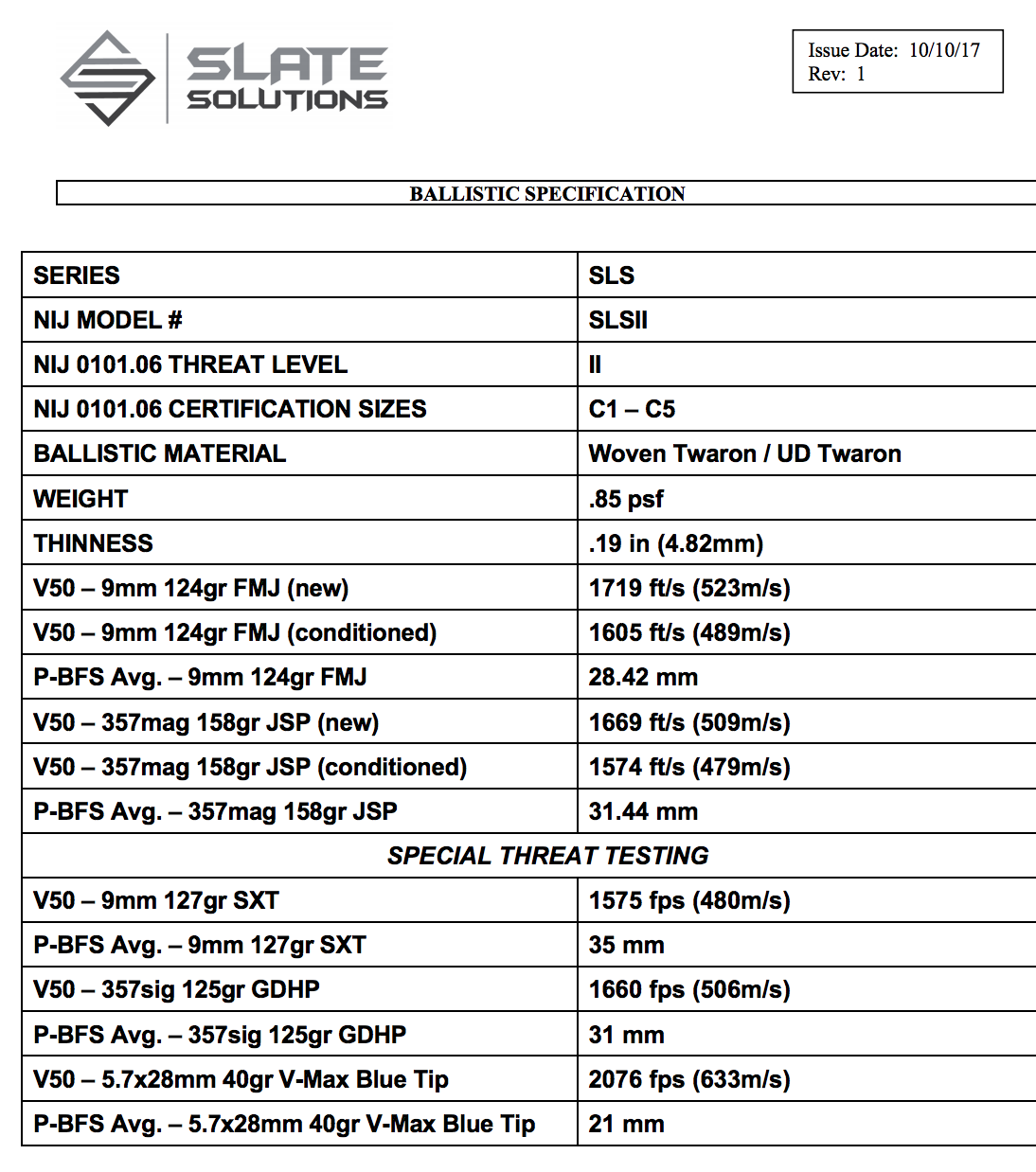 A look at Firearm Homicides from Boston (the only city I could find) further shows why Level II is plenty. Other then the 3x .44 mag and 1x 7.62x39 cases, every other caliber would have been handled well by Level II: 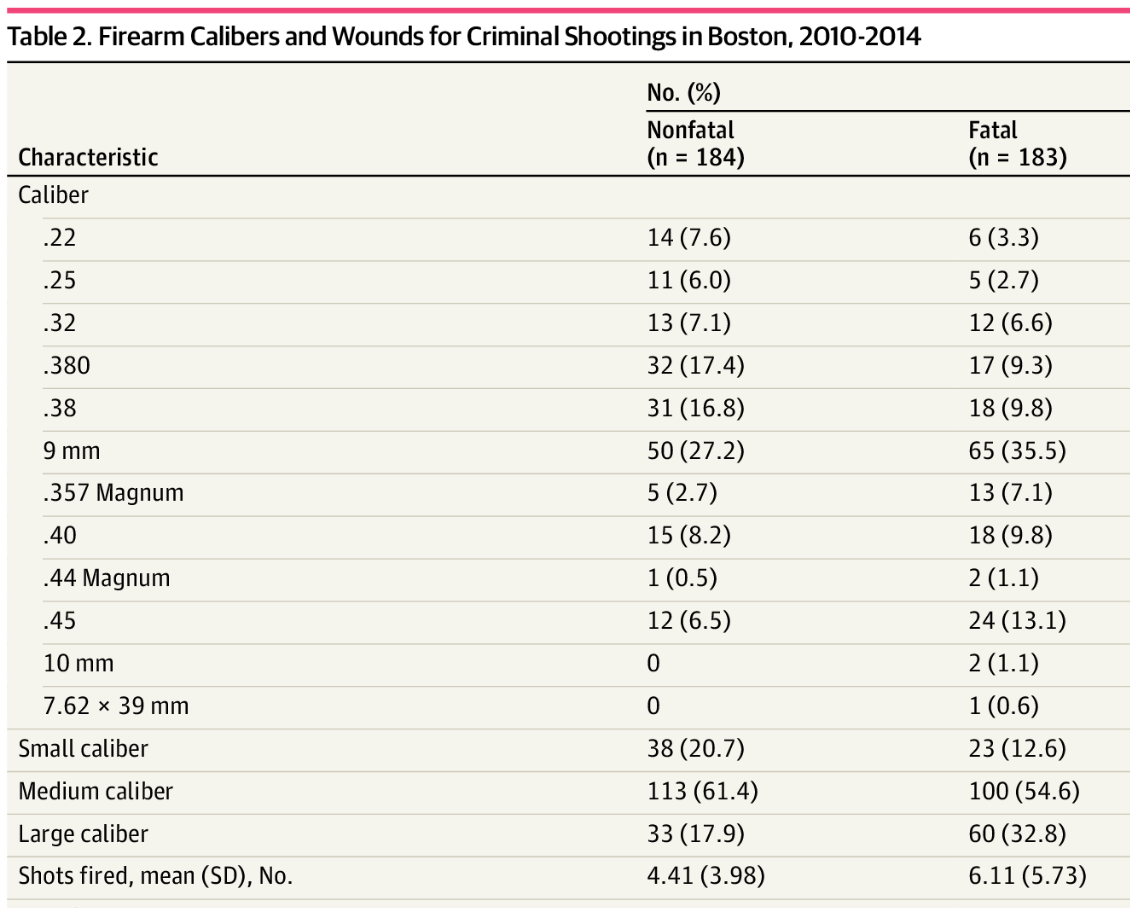 Why Stinger vs other Level II:


There are thinner Level II vests with even higher V50 specs.

But, the Stinger was pretty close at 0.19", and at $450 with carrier, it was 1/2 the cost of these options. Better still, it can be easily purchased directly from Midwest by Civilians. The other vests require buying through distributors, most of whom require some form of LEO/MIL type verification.

So, the Stinger II was the 80/20 option. Good specs, good price, minimal hassle.

The Stinger II w/ carrier is a custom order, not offered on the website.

To order you need to email Midwest. Tell them you want the Spectre Stinger IIIA Kit:
https://midwestarmor.com/products/specter-iii-a/

But instead, you want the Stinger II panels installed:
https://midwestarmor.com/products/stinger-ii/

**EDIT** The Stinger is now a Factory Option:
https://midwestarmor.com/products/specter-stinger-ii/


Overall, if you're looking for a concealable vest for times where you want more protection then a CCW, but the situation hasn't devolved to the point of carrying rifles and rocking Level IV, then the Stinger II is a solid choice.