Armory » Machineguns (MG)
MKII Sten to MKVI conversion; new video in OP (Page 1 of 2)
I bought this York Sten MK2 last year and got a really good deal on it , it runs great but I felt it was just lacking, and as I am not a rich man I decided to look at options. I considered doing a stenchester or a stenling but decided I wanted to do a MKVI. 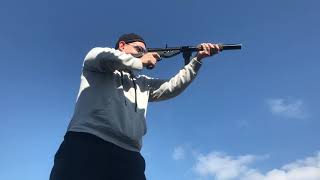 Here’s what I’m starting with , it’s an old pic before I replaced the front sight and refinished it.


This is what I’m shooting for. The MK6 is a MK5 with a MK2 front sight and suppressor.


Here is my donor MK5 trigger housing. I cleaned up one of the wings and removed excess remaining tube the other day, I haven’t had a chance to finish cleaning it up yet.


Today I decided to work on getting the MK2 receiver from its lower. I’m only using files and no power tools for this. This took a few hours but I managed to get a lot done today. Slow and steady wins the race.


I’m lucky York was such a shitty welder I was able to file it down and give it a good wack with a 14” bastard file and the weld broke in all the areas I was able to file on. Next I need to break out the saw to remove more of the lower so I can can get to the rest of the weld on the back.


Here is some parts for the suppressor , My form 1 should be back sometime next month and I’ll be able to get started, I’m basically doing the same suppressor build that one of our members did for his S&W76.  The suppressor is going to be 13 inches long so it is very close to the original length used in WW2.

Done minus the parkerize finish for the suppressor , that could be a while though , I posted a link to a video of it firing further down in the thread.

Here is the screen mesh packing for the expansion chamber.