Is it the keepshooting.com brand?  I was going to get a few some time ago.  Their website seems to be filled with all kinds of positive reviews but I saw other users state they had problems with them.  I think it was on the CMP forums, maybe here.

IIRR those A/O  mag's are made by Promag

What's wrong with the Korean mags?  Other than being an import?  Everything I've seen and read about them has been quite positive.

This reminds me that I need to get my couple KCI 30 round "banana clips" out to the range for testfire.

Quote History
Originally Posted By Melvin_Johnson:
What's wrong with the Korean mags?  Other than being an import?  Everything I've seen and read about them has been quite positive.

This reminds me that I need to get my couple KCI 30 round "banana clips" out to the range for testfire.
View Quote

Overall I've been having good luck with the KCI 15 rounders. I've had a couple bad ones but taking them apart and checking the springs helped on 1.

Haven't bought any of the 30 rounders, so can't speak to those.

Here are the Pro Mag brand at Midway USA:

The KCI have last round hold open followers too which i like.

Avoid these at all costs. The KCI mags are better IMO

Promag blows. Unless they have improved the QC of their products since the magazines that I owned, I would avoid them and opt for some other company’s 5 round magazines.

I have never owned a magazine made by Promag that was worth putting in a gun
Some face palms are forever
In my personal experience, just about every USGI 15- or 30-rd magazine required the magazine spring to be replaced.  Some OEM mag springs were rust-pitted, and almost worthless.  No sense trusting a +50-year old spring.

There's an updated, USGI mag-latch that is required for 30-rd mags, and is compatible with 15-rd mags.  Install the updated mag latch, and replace the mag springs.  Chances are you'll be OK, unless the mag body has been damaged.

Most M-1 Carbines should have all their springs replaced, at this point.  Most all the complaints about USGI carbines are due to very old springs. Replace them all.
Promoted to Member by Ed, Sr.
I have about 30 USGI 15 round mags and about a dozen Korean 30 round mags. The Korean mags are good stuff, never a problem in any of my 3 M1 Carbines.

Find unissued in cosmoline ones. They should have a wax paper wrapper.

Under that grease is the best M1 carbine magazine ever made. You can find them as low as $25 with some digging.

The M1 Carbine magazines aren't exactly complicated and I see very little physical difference in them. In fact if I'm shooting any type RN ammo, be it soft point, RNHP or FMJ, I can close my eyes, grab a magazine and it will feed. 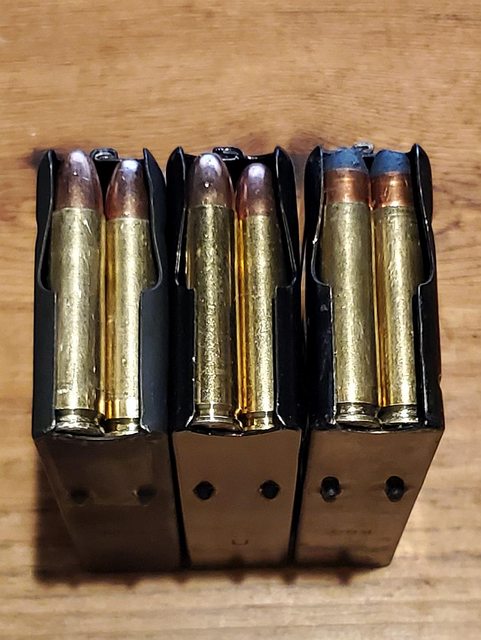 ETA- If you're having feeding problems with your Carbine, I'd suggest disassembling the bolt. I have an Iver Johnson that doesn't want to chamber the first round out of a magazine unless one works the bolt with gusto; the extractor didn't want to snap over the rim of the cartridge. I ordered a bolt disassembly tool and took the bolt apart. It was packed with crud, especially around the extractor and its spring and plunger. After giving the entire bolt a good cleaning and reassembling the bolt and rifle, it now functions perfectly and I can pick up the first cartridge out of a magazine, ride the bolt about half way home then release it, and it will chamber a cartridge as it should.
"People tend to have a proclivity towards an object rather than their own skill."
I picked up a couple of mags from keepshooting.com.  Had issues with every single one. I have some newer mags that are stamped U on the back.  They look like USGI but are too new to be.  Anyway, never an issue with those repros.  Picked them up on eBay.

I use these guys

Keepshooting mags are great. I just bought 4 more of the 30 rounders

I use these guys

Fulton Armory
View Quote
Might not be a bad idea to replace all the other springs on your nearly 80-year old GI Carbine.  And the mag springs.

Quality springs wear out due to usage, and rust.  You can see the rust, but not the usage.

I suggest replacing all springs on older firearms, as a matter-of-course.  Buy them from trusted vendors while still available.

BTDT for many firearms.  FWIW, some previously commonly-available springs are no longer available.  Not to mention commonly-needed spare parts, such as extractors and so forth.

Snooze and lose.  Your rifle may be a single part away from being useless.

If Biden bans inter-State sale of firearms parts, what will you do?

Got mine.  Get yours.


Promoted to Member by Ed, Sr.
I know the original post is from July but in case anyone is looking, here is NOS of USGI M1 carbine magazines at Century Arms.