Armory » Machineguns (MG)
American 180 owners.
Who’s got one?  What are your thoughts?  I’m kinda itching for a 22 machine gun and am considering one of these.

If you like to tinker, they are great fun....if you want H&K reliability, they are not for you!

First machine gun I ever bought, tons of fun, cheap to feed!

I don't have an AM180, but I do have a Bazooka Brothers adapter that lets me use AM180 drums in my M11/9 with .22 conversion. It's better than sex, when it works, but loading the drum almost makes it not worth it.

That being said, if you've got the budget, I'd buy one in a heartbeat.

My dad accidentally turned the video to black and white, but this was the first run with mine. 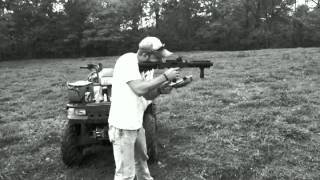 An AM180 was the very first machinegun I ever shot as a kid back in the 80s and is probably one of the guns most responsible for buying machineguns as an adult.

I will say they are awesome when they work and if you have somebody else to load the drums.   Conversely, they can be an exercise in maddening frustration if they don't run well as clearing jams isn't the easiest proposition.

For me personally in either scenario the whole mode of operation is a bit of a chore after a couple of drums if you are doing it all yourself.

1. The first step is  loading the drum tray which is pretty time consuming unto itself. The larger the drum and the more layers it has the longer it takes to load.
2.  Next install the winder onto the drum.
3. Then install the drum+winder onto the gun and then wind the winder the right number of turns depending upon the drum capacity.
4. Pull trigger and let bullets fly at 1200rpm and hope you don't get a stoppage in 200+ rounds (which you probably will) or the winder runs out of steam before the drum is empty.

Personally I shoot my Norrell 10/22 way more than my AM15.  The whole purpose in my mind for the AM180/AM15 is just for the rush of a large drum dump.

Practically speaking, I can probably shoot more rounds from my 10/22 in a shorter amount of time than I could with the AM15 as I could load 11 x 10/22 mags in less time with a Lightning Loader than I could load a single 220rd AM180 drum, get it set up and then actually fired.

That said there is little else out there that can provide the experience that the  AM180 can do in terms of comically  large drum dumps.  However, IMHO you take a decent amount of downside for "that one trick" in terms of loading time, stoppage clearing complexity, and actual useful real aimed fire and configuration modularity that 10/22 platform provides.

I own an AM180 and enjoy shooting it (when ammo is available).

I do have a few things I do:  Keep it clean, overwind the winder by 1/2 a turn (all my winders are ungeared), use good ammo, and replace the recoil spring at first sign of compression.

I usually will shoot 2 drums (I mainly use the 165 drums with CCI Mini-Mags) from a barrel before cleaning the barrel and wiping down the feed block area.  I also have 9" and 14" barrels threaded to shoot suppressed.  TBA suppressors did an awesome job repairing an original AM180 suppressor with a modern baffle stack; it is high-volume, easily handles running a drum, and is easy to clean.  I also limit myself to shooting 2 drums suppressed (mainly CCI Standard Velocity) before cleaning.

I had Val Cooper (E&L) tune it and he's also supplied me with multiple barrels, parts, and spares.

I've got a couple friends that have/had them and they both ran 100% except for usually jamming on the last round which is typical for them.

My first MG was a Norrell AMT Lightning (10/22) clone.  I got mine during the 1994 AWB and high caps were expensive since you could only get grandfathered ones and if you could find them, Norrell himself recommended the 30 round Eagle as the best then some of the 30 round Ramline and Butler Creek.  I don't recall him recommending any of the 50 round options like the Ramline with the snail spring or the old Sandford drums.

I got a RR Colt SP1 thinking I would use the Ciener steel mags which should never wear out and so glad I did.  It took some work but I got it to be just as reliable as my old Norrell and I could also run whatever caliber that works in an AR15 platform.

Here is a video of mine running the 500 rounds in bursts, it had zero malfunctions:
It has a slower rate than the AM180 which I like. 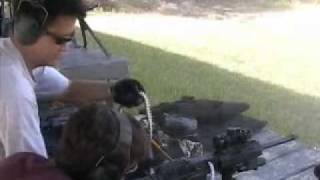 And this guy ran a 1000 round belt w/ zero malfunctions: 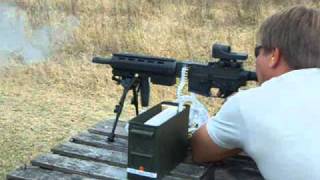 Loading belts is tedious but I think with the belt loading jig that Lakeside used to sell screwed to a wooden stick, you can get anyone to help load belts.  Where I think it takes more instruction to teach someone how to load a 180 drum.
Plus a RR M16 is way more flexible than a 180 or Norrell.