AK-47 » AK Discussions
My Polish Underfolder from Years Ago.
Years ago there was some guy here selling very nice Polish AKMS kits. I luckily snagged one and it was in excellent condition. I found out later that seller had issues with other folks, but my memory of the whole ordeal is fuzzy. I sent my Polish kit and receiver with enough American parts to a guy who had advertised on the AK side. He had built me a Bulgarian 5.45x39 side folder (which I wish I still had) and did an excellent job.

After I sent my stuff to him, this builder had a run of very bad luck. IIRC, his FIL who helped him build passed away and left him stacked up with orders he was very slow to fill. I remember it got very nasty when the guy would post status updates here. There was a lot of dog piling on the guy, I honestly don't remember if I participated in it. Lots of threats and I'm sure several folks filed complaints with the ATF.

The guy posted some updates one day (many months after my build and payment of $300 had been sent to him) and the dog piling ensued. I remember liking my kit a lot and replied in his thread not to worry about the money I had sent him, but please send my stuff back to me even if I had to pay for the return shipping. He told me he'd make things right and after a couple of weeks I sorta forgot about it.

I'm not sure how long it had been since that communication had taken place, but one Friday after a very long and frustrating work week had ended, I got home and my wife said I had a package. That package was my completely finished AK. It was beautiful, the finish was excellent, and when I sighted it in the sites were straight as they could be. I was very happy with the build. I take it out of the back of the safe every so often to look at it and oil it if need be. Anyway, after going on too long here are some crappy picks of one of my most prized AKs. Also, the receiver used on the build was an Armory USA receiver that was their second gen, so to speak.

Thanks for sharing the story, that looks like an awesome underfolder.
We are just a minor threat.
The Poles make some nice stuff, don't they? Beautiful Polish AK. I have one as well and it's probably the nicest AK I have.

Interesting story. MANY years ago (around the time of the end of the assault weapons ban) there was a guy on here offering barrel threading services, so I sent him my ban-era Bushmaster 20" barrel for threading, along with payment. Not sure what was going on with the guy, but he began to not return the barrels sent to him. Then he started returning some unthreaded and he wouldn't answer posts or emails for months. He took a beating on this site with a few threatening to hunt him down. My barrel was among those that "disappeared", so I wrote the guy an email saying I understood he may be going through some hardship, and I am not one to judge. The only thing I wanted was my barrel back whenever he got around to it. I wasn't even concerned about the money. A week later, I received the barrel, threaded.

Originally Posted By twistedcomrade:
I take it out of the back of the safe every so often to look at it and oil it if need be.
View Quote
Why don't you shoot it?


I think I know the builder you are talking about, his name escapes me at the moment.   Got some minty plum mags from him.

"You got to lick it, before you stick it."©
What would you die for? Unlikley for the average dipshit. Most people just ain't worth it.--drjarhead
I'm SNARKY with the moderator

Why don't you shoot it?


I think I know the builder you are talking about, his name escapes me at the moment.   Got some minty plum mags from him.
View Quote
I don't intentionally not shoot it, I just don't get it out often, same with my SP1.  Probably boils down to it being irons only and now that I'm older, I just don't shoot it as well as I once could.
Capitalism produces, communism reduces.
I have one just like it and it was a safe queen for years until this year. It is now zeroed in for the kill shot. I bought the all matching excellent condition kit off of EE and sent to to Gun Plumber at Arizona Response Systems. Top notch rifle.
"Beware of false prophets, which come to you in sheep's clothing, but inwardly they are ravening wolves." Matt 7:15 KJV
"Those who can make you believe absurdities can make you commit atrocities." Voltaire
I wish I would have bought more of the kits when they were cheap.
Capitalism produces, communism reduces.
Neat!

UF are my favorite style of AK’s.

I was acquainted with some of the crew at Global Trades. Ron Yates really did a lot to get the AK better known in the US. Sadly most of them have passed on now.

I think sometimes the gunsmiths who do these builds get overwhelmed.

MateFrio - "Evil is not a mental disorder. We cannot treat a misguided moral compass with drugs and institutions." 08/26/15
Nice.

I bought a excellent all matching numbers Polish underfolder kit off of EE about 5-6 years ago and had Gunplumber from Arizona Response Systems put it together. It was a safe queen for a long time until last fall when I sighted it in. No use having a gun that isn't sighted in. 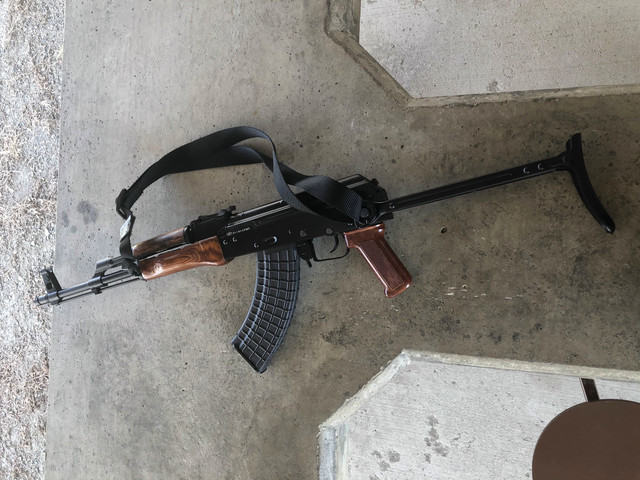 "Beware of false prophets, which come to you in sheep's clothing, but inwardly they are ravening wolves." Matt 7:15 KJV
"Those who can make you believe absurdities can make you commit atrocities." Voltaire
I love Polish AK's.

I have one and it's one of my favorite guns.

I’ve had several builds done by many builders and have definitely run into some with “issues”. My Bren semi build took exactly two years to get back with lots of excuses along the way, but it came back so glorious I’m tempted to have him do another.

Two Rivers have been phenomenal BTW ....

The Polish Underfolders were phenomenal!

I kick myself to this day that I sold it off after the Sandy Hook Shitstorm...

The QUALITY & Craftmanship of the gun was just enough to slap in the face & shut the mouth of any "expert" who would say "AK's are Trash Can Guns"...

LIFE'S JOURNEY IS NOT TO ARRIVE AT THE GRAVE SAFELY IN A WELL PRESERVED BODY,
BUT RATHER TO SKID IN SIDEWAYS, TOTALLY WORN OUT SHOUTING "HOLY $H!T...WHAT A RIDE"!!
People rip on the AKMS but I love the fucking things. Maybe my fat ass head sits on those cold hard stamped arms just right. I've built several, shot them.. had fun, regret trading every fucking one of them. Kinda working on putting one final underfolder build together now and dressing it up in Polish furniture lol.  Good stuff man, sorry you had so many problems. I understand builders getting backed up... but fucking original barreled kits go together like an AR15 with the right tools. No reason anyone should hang on to shit that long or take someones payment up front like that.

One of my favs~

Its a rescued hacked build someone did on a Hesse / Vulcan receiver. Matching parts set and barrel put on a Childers receiver.
I did have to replace the bolt from the prior hack build. 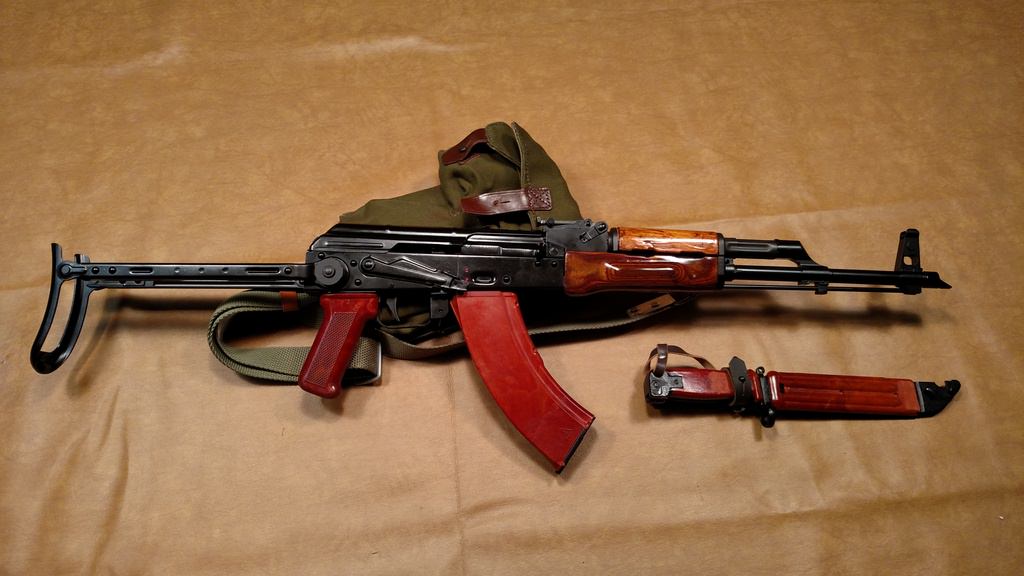 Mine is one of my favorites. 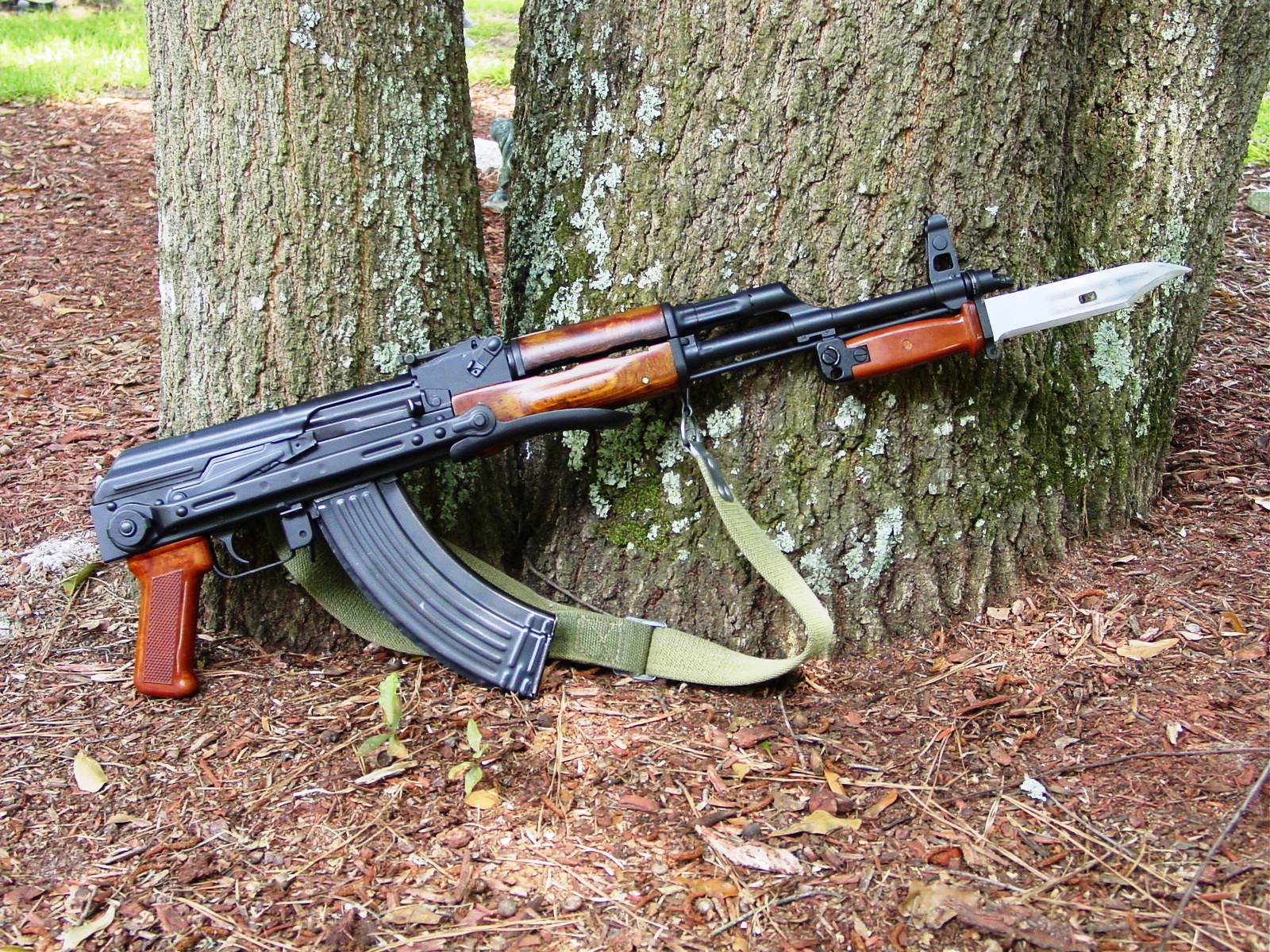 Whats better than a Polish UF ?
A Yugo UF~ 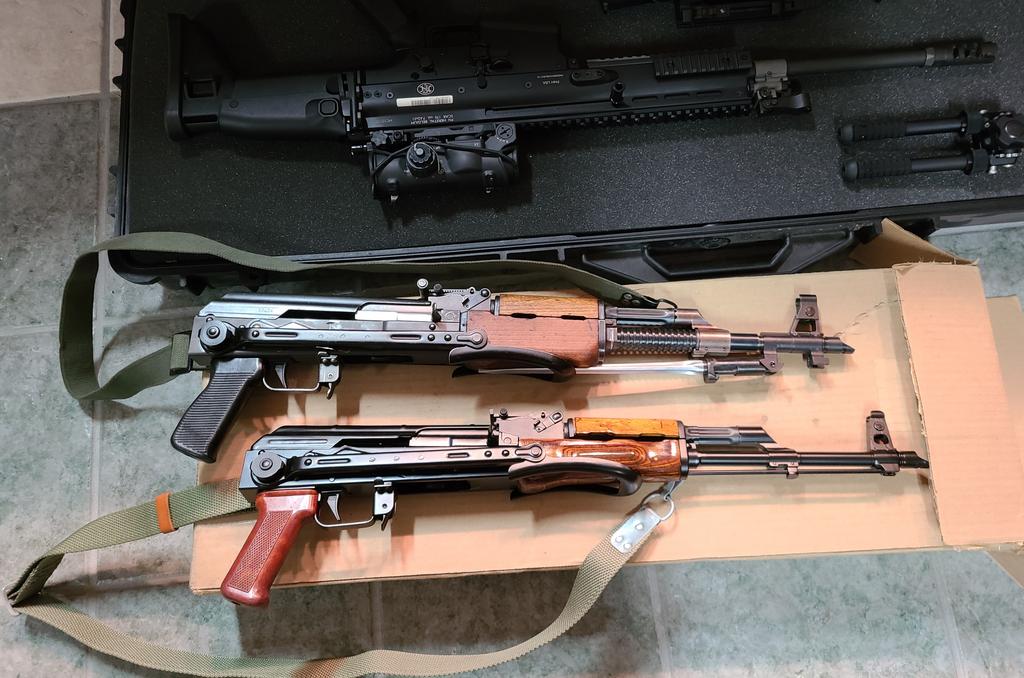 My Polish Underfolder from Years Ago.