AK-47 » Galil & Valmet Discussions
InRange finally mud tests the Galil ACE (in .308)
Karl from InRange finally put a Galil ACE through the mud test.  The example in the video is chambered in .308.  Overall it did better than all of the AK variants they've done so far: Hungarian AK, Arsenal SLR, and Finnish Valmet.  It did end up finally choking, but overall ran better than other examples of AK platform weapons.  Karl concluded that the spring loaded dust cover on the left side did its job in keeping mud out of the action.  The point of failure was mud seeping in through the ejection port as he was shooting and into the locking recess what was keeping the bolt from going into battery.  Overall not bad as it did choke, but a lot of guns have choked up pretty badly in these tests. 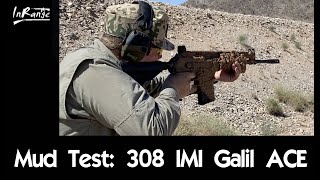