Go to Deal
Step into the Wayback Machine and go back to the beginning of the AR-15 with our BRN-Proto® - a faithful replica of the Eugene Stoner’s very first AR-15 prototype. If you're an AR-15 aficionado or collector, the BRN-Proto® is a rifle you should not be without! Based on AR-15 Serial Number One, the Brownells BRN-Proto® sports a wealth of unique, historically accurate features you will not see on later AR-15 / M16 models.

First, the BRN-Proto® has the distinctive trigger-like charging handle on top of the receiver, under the carry handle, just like the early AR-10 models (remember, the AR-15 was developed second.). It has the uncluttered “slick-side” upper receiver of the early rifles and stock, handguard, and pistol grip of brown reinforced polymer that replicates the look - but not the weaknesses - of the original fiberglass furniture. If the round cross-section handguard looks oversized, that's because it is. Just as the original was a "borrowed" AR-10 'guard, it's actually lifted from our BRN-10® .308 rifles! 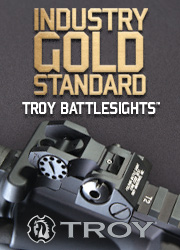