Ok. I'm hyperparanoid. Plus, vacuum packing is cool. Which vacuum packer should I use? How do I get started?

When sealing up small insects gets boring your attention might naturally turn to your ammo stash. If you really must, one AR15.COM user (RBAD) had the best results with the Tilia FoodSaver Pro. He had several suggestions for us:

The only packer worth its salt is the Tilia FoodSaver Pro. I bought it from a local gourmet food store for around $350.00. I've probably spent 5 times that amount on bags though. You really need to use the manufacturer's bags to obtain a good vacuum seal (they have tiny ridges impregnated in the plastic to allow the air to be sucked out). Normally, I pack several boxes of ammo in one bag, but for my "bug out bag" I wanted to individually pack each box. You need to leave a few inches around the perimeter to allow the sealer to effectively seal the edges. 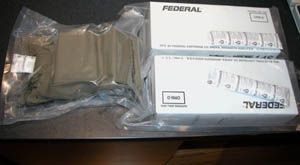 It's probably not a good idea to seal loose ammo or ammo on stripper clips, or in magazines. The sharp edges are likely to wear through a vacuum bag if the package is moved around or if many such packages are stacked together. Instead you should seal anything that has pronounced edges or points only after you've wrapped it in something first. If that isn't paranoid enough for you consider putting a small desiccant package in each vacuum sealed container. Also remember that vacuum packed ammo is still vulnerable to heat or quick temperature changes.

After all that trouble you're probably going to wish you had just used an ammo can in the first place. 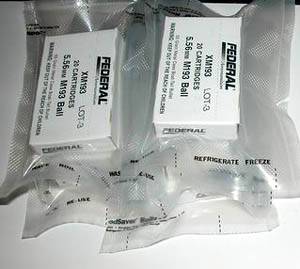 Opinion: AR15.COM user Skibane notes that BrownCor and U-Line both apparently sell vacuum bags at a fraction of the cost of the original food saver types.

Opinion: It's possible that over-vacuuming ammo might cause it some damage. Although it seems unlikely, it's possible that damage to the primer or the primer seal may result from subjecting ammo to extended periods of strong vacuums. If this concerns you then you may wish to vacuum out most of the air--but not create a overly-strong vacuum.